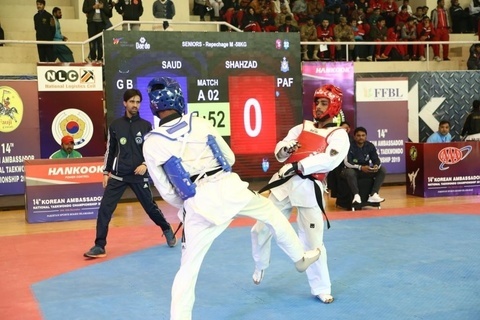 They were followed by Zeeshan, Misbah Maqbool, Danial Ahmed, Anosha and Sabika on runner up spots, whereas Rehmat Ullah , Rubina Sikandar , Fahad Sohail, Areeba Javed and Sadaf settled for the third position, respectively.

The fourth position holders were: Salman , Samra, Abdul Malik , Taqadas Fatima and Naimal, in accordance with the above mention weight classes.

While overall, at the end of the fourth day comeptitions, KPK athletes now stand at the top spot after accumulating 56 points in total while PAF and Sindh teams having same points i.e. 40 are at the second spot. Gilgit and the hosts, Islamabad have taken 3rd and 4th positions with 23 and 20 total points, respectively.

Army took the 5th position claiming 25 points and Balochistan along with WAPDA team is on the 6th spot with total 15 points in their tally. Navy athletes are lacking behind with 6 points.