Pakistan U-16 cricket team beat Bangladesh by 99 runs in the first 50 over game between the two sides played at KRL stadium, Rawalpindi. 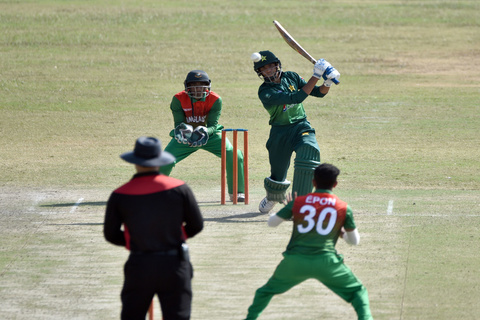 Pakistan U-16 beat Bangladesh U-16 by 99 runs in the opening match of the three match 50-over series at KRL Stadium in Rawalpindi on Monday.
Bangladesh were dismissed for 132 while chasing 232 runs posted by Pakistan after winning the toss and electing to bat.
Mohammad Shehzad (40) and Ali Hasan (30) provided a solid 66-run start to the home team.
After the dismissal of both openers, the innings was consolidated by Ibrar Afzal who came to bat at number five and top-scored with a 70-ball 53 which included five fours and a six.
Pakistan were dismissed for 231 in the last over of the innings.
For Bangladesh, Ahosun Habib and Shamsul Islam managed to pick three wickets apiece.
The visitors, Bangladesh, lost three wickets for six runs on the board courtesy of Muneeb’s fiery spell of bowling and were never in the hunt to win the match from then on and were bowled out for 132 runs in 40.5 overs.
Amir Hossain retired hurt for the visiting side on 19 and did not return to bat.
Tawhidul Islam top-scored for Bangladesh with 43 off 79 balls hitting five fours and a six in the process.