Pakistan U-16 team dominated Bangladesh on the first day of their second three day match at KRL stadium Rawalpindi. 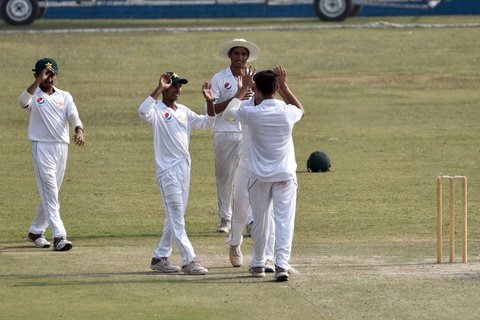 Ayaz Shah claimed three wickets for 14 runs as Bangladesh U-16 were bowled out for just 108 runs in their first innings on the opening day of the second three-day match against Pakistan U16 at the KRL Stadium in Rawalpindi on Wednesday.
Bangladesh wobbled from  the beginning and were never in a position to score big and continued to lose wickets at regular intervals after Pakistan captain Aliyan Mehmood asked the touring side to bat.
Radowan Hossan Siyam batting at number four top-scored with a 50 off 76 balls for the visiting side.
Besides Ayaz’s three wickets, Ahmad Khan and Ali Asfand took two wickets apiece for 18 and 31 runs respectively.
In reply, Pakistan were 127 for three, taking a lead of 19 runs when the stumps were drawn.
Ali Hasan top-scored with 59 off 81 balls, laced with eight fours and a six. Haseeb Imran (1) and Mohammad Shehzad (25) were the two other batsmen to be dismissed.
For Bangladesh, Shamsul Islam Epon took two wickets for 31 in 10 overs.
Play will resume on Friday, November 1 as Thursday has been declared a rest day.