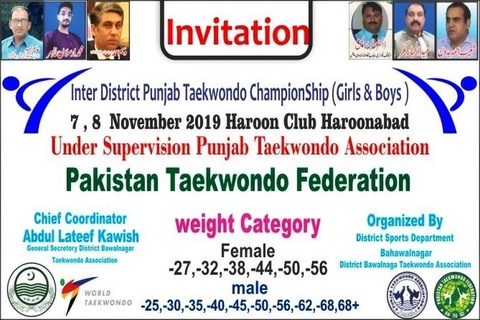 The trials will be held on 1st of November, Friday at NS Taekwondo Center Jinnah Park in Multan at 02:00 PM sharp. These trials are open to both male and female fighters who will be competing with all their skills so as to become a part of Multan Taekwondo team.

The Multan District Taekwondo Association is hopeful to produce a strong team that would be able to win laurels for the district in the Inter District Punjab Taekwondo Championship 2019 which will be held on 7th to 8th November at Haroon Club in Haroonabad.

The event for which the above mentioned trials are being held, is going to be organized jointly by District Sports Department Balawalnagar and District Balawalnagar Taekwondo Association under the supervision of Punjab Taekwondo Association and Pakistan Taekwondo Federation where the female fighters will have their fights contested in a total of six different weight classes of: 27 Kg, 32 Kg, 38 Kg, 44 Kg, 50 Kg and 56 Kg.