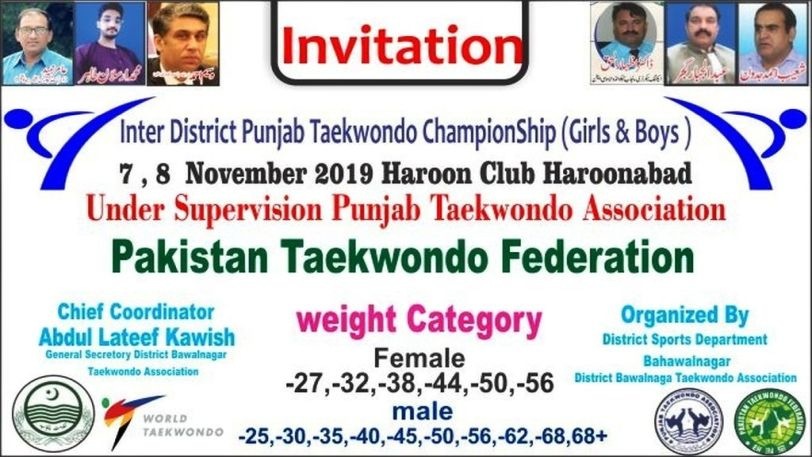 7 November, 2019 - 8 November, 2019
Haroonabad
Haroon Club
Taekwondo
The Inter District Punjab Taekwondo Championship 2019 was another incredible chance for Takewondo talent existing in the country to showcase their skills, that was held for two days: 7th  and 8th November at Haroon Club in Haroonabad.
The event was organized jointly by District Sports Department Balawalnagar and District Balawalnagar Taekwondo Association under the supervision of Punjab Taekwondo Association and Pakistan Taekwondo Federation where several Taekwondo fighters competed against each other to earn top honors in their respective weight classes.
As many as 16 weight category competitions were contested in this event that were open for both male and female fighters where the female fighters had their fights contested in a total of six different weight classes which include: -27 KG, -32 KG, -38 KG, -44 KG, -50 KG and -56.
While male fighters competed in a total of ten different weight categories of: -25 KG, -30 KG, -35 KG, -40 KG, -45 KG, -50 KG, -56 KG, -62 KG, -68 KG and 68+ KG.
Among many participating districts, it were the athletes from Faisalabad division that overpowered every other opponent to accumulate as much medals as possible into their tally to take home the title victory of this mega championship.
They were followed by Bahwalnagar division on the runner up spot while Multan region settled for the third spot and fourth position was taken over by Khanewal district.
The top three positions grabbers in each weight class were awarded with lavish trophies along with certificates while all the other participating fighters were given certificates.
Mr Abdul Latif Kawish, General Secretary of District Balawalnagar Taekwondo Association was the Chief Coordinator for this mega Taekwondo bonanza.