The first three-day match between Pakistan and Bangladesh U16 teams ended in a draw at the KRL stadium in Rawalpindi on Sunday. 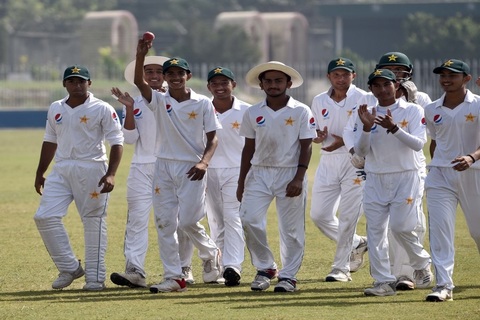 The first three-day match between Pakistan U16 and Bangladesh U16 sides ended in a draw at the KRL stadium in Rawalpindi on Sunday.
Resuming their second innings from 119 for four, the visiting Bangladesh side were bowled out for 200 runs in 95.2 overs but Bangladesh had gained a 283-run overall lead thanks to their first innings dominance. Nayeem Ahmed who scored 54 runs in the first innings top-scored with 73 runs in the second innings, his knock was studded with 14 fours. Tanbir Alam Sham scored 42 runs.
For Pakistan, left-arm-spinner Ali Asfand took six wickets while captain Aliyan Mehmood took two wickets for 32 runs.
Set a 284-run target, Pakistan batted resolutely in the second innings to avoid a repeat of the first innings batting collapse. Pakistan played out 43 overs scoring 112 runs for the loss of two wickets when stumps were drawn and the match was declared draw. Opener Mohammad Shehzad top-scored with an unbeaten 80 off 127 balls, his attacking innings included 14 fours and two sixes.
Ahmood Sharif and Amir Hossain took a wicket each for Bangladesh.
In their first innings of the match, Bangladesh had Pakistan in a bound. Scoring 204, Bangladesh managed to get Pakistan's U16 side all out for 117 thanks to a four wicket haul for Ahmood Sharif.
The next match will be played from October 30 to November 1 at the same venue.
Scores in brief:
Bangladesh 204 all-out, 63.5 overs (Radowan Hossan Siyam 84, Nayeem Ahmed 54; Ahmad Khan 4-43, Ali Asfand 2-31, Aliyan Mehmood 2-53 ) and 200 all-out, 95.2 overs ( Nayeem Ahmed 73, Tanbir Alam Sham 42; Ali Asfand 6-51, Aliyan Mehmood 2-32)
Pakistan U16 117 all-out, 45.1 overs (Ibrar Afzaal Khan 51, Mohammad Shehzad 19; Ahmood Sharif 4-24, Amir Hossain Asif 3-19, Mohammad Musfik Hasan 2-33) and 112-2, 43 overs (Mohammad Shehzad 80 not-out)