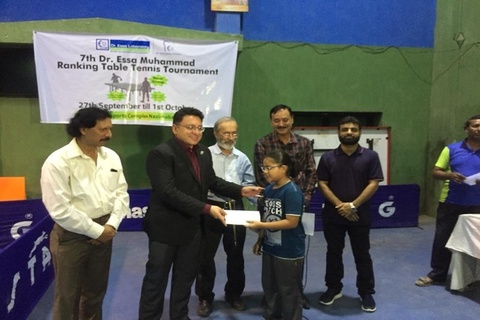 The seventh edition of Dr Essa Mohammad Ranking Table Tennis Tournament concluded successfully where promising Furqan Patel and Hoor Fawad emerged new men and women singles champions by winning their respective finals as curtains fell at the Sindh Sports Board (SSB) Sports Complex, Karachi.
Fourth seed Furqan stunned defending champion Aahil Shah 7-11, 11-9, 12-10, 11-4, 8-11, 12-10 to win yet another honour. Furqan, meanwhile, ended the event with a double crown as he together with Kaif Riaz have won the men’s doubles title by hettng the better of the pair of Salman and Usman 11-5, 11-8, 11-8 in the final.
The 11-year-old unseeded Hoor powered to straight 11-9, 12-10, 12-10 victory over fourth seed Maria Tazeem to land her maiden women’s singles crown. Hoor’s elder sister Saman had lost to Maria in the quarter-final.
It is pertinent to mention that top three seeds in the men’s and women’s singles have made their exit earlier.
Dr Farhan Essa, a former table tennis player who graced the finals, gave away the prizes. He had instituted the event in the name of his illustrious father Dr Essa Mohammad who was a top ranked national player when the game was in its infancy in the country.
Also present at the finals among others were former international Arif Nakhuda, Mohammad Nakhuda, Obaid Hadi Khan and secretary Sindh Table Tennis Association Saleem Ahmed.