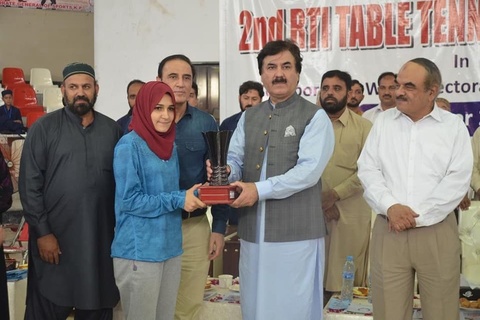 The second edition of the Right to Information, Khyber Pakhtunkhwa Table Tennis Men and Women Championship concluded successfully here at Qayyum Sports Complex, Peshawar.
Nimra Rehman from Peshawar overpowered Hiba Iqbal from Swabi to win the girls singles title of 2nd RTI KPK Table tennis Championship 2019.
Last year, the championship was held at Peshawar district level but this time they have widen up the pool and more than 150 players including 50 female would be part of the Championship.
The players participated in Boys Singles and Double and Girls Singles and Doubles. The first two rounds of the Championship were organized on knock-out basis while the rest of the Championship were organized on single league basis.
At the end, Khyber Pakhtunkhwa Information Minister Shaukat Ali Yousafzai graced the ceremony as chief guest and gave away trophies and cash prizes to the winners and runners-up of the second RTI Boys and Girls Table Tennis Championship.
Provincial Minister distributes prizes to successful players and announces Rs 150,000 to the players and joins players in the Right to Information Walk to celebrate World Information Day falling on September 28.