Pakistan's batting line-up, which had misfired frequently in recent matches, finally came together in their first match of the World T20 2016 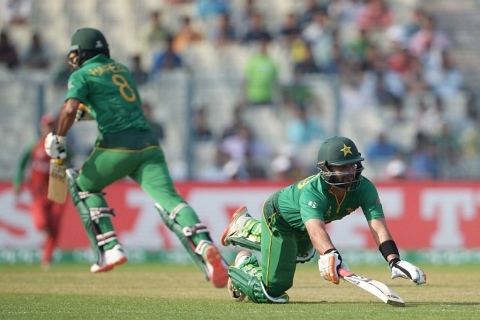 Pakistan's batting line-up, which had misfired frequently in recent matches, finally came together in their first match of the World T20 2016 to overpower Bangladesh by 55 runs. Fifties from Ahmed Shehzad and Mohammad Hafeez, and Shahid Afridi's 19-ball 49 propelled Pakistan to 201 for 5, a total which proved too steep for a side that had beaten them in their last two T20I encounters. This was only the second time Pakistan scored more than 200 in a T20 international, and the previous instance - in April 2008 - was also against Bangladesh.
Pakistan opted to bat first and, right from the start, kept their foot on the gas. They took 18 runs in three separate overs and failed to hit a four or a six in only two overs in their innings - the 9th and 14th - bowled by Shakib Al Hasan and Sabbir Rahman. Pakistan's opening pair of Shehzad and Sharjeel Khan was the fourth the side have tried out in T20Is this year, and Sharjeel set the tone, smashing two sixes and a four off Al-Amin Hossain in the second over.
Sharjeel fell in the next over to Arafat Sunny but Hafeez walked in and found his groove immediately, with a straight six down the ground off his second ball. Shehzad, who had struck a serene cover drive off Taskin Ahmed in the first over, then pushed the same bowler through midwicket, before pasting Sunny over extra-cover. His first three fours were pleasing shots, even as Hafeez blasted boundaries down the ground.
By the end of the Powerplay, Hafeez and Shehzad had similar scores before the latter pulled away and raced to his fifty off 35 balls. Shehzad fell in the 14th over, pulling Sabbir to the deep midwicket fielder for 52 off 39 balls with eight fours. His wicket ended a 95-run, second-wicket partnership that, through a combination of big hits and clever strike rotation, did not let the Bangladesh fielders relax.
Afridi promoted himself to No 4 to take advantage of the start. After Hafeez had reached his fifty in the 15th over, bowled by Mashrafe Mortaza, Afridi smacked two fours and a six off consecutive balls to produce an 18-run over. The pair took another 18 runs off Al-Amin's next over, with Hafeez striking two fours and Afridi a straight six.
Hafeez fell for 64 off 42 balls, immediately after striking his seventh four. He was caught brilliantly by Soumya Sarkar at the deep midwicket boundary. The fielder grabbed the ball close to the boundary rope; the momentum took him over the line so he lobbed the ball in the air, came back on to the field and completed the catch. The agile effort was the only solace for Bangladesh in the first innings.
Afridi unfurled the big shots in the overs that followed, including a four and a six off Shakib in the penultimate over. He went into the last over on 49 off 18 balls, on the brink of the record for the fastest fifty by a Pakistan batsman in T20Is, but he holed out to the deep square leg fielder and, in the process, also missed his first T20I half-century since June 2012.
Sarkar's joy from that smart catch was short-lived as Mohammad Amir uprooted his off stump on the third ball of their chase. Sabbir Rahman, who started off with a sweetly timed four past point, made sure, however, that Bangladesh didn't fall off quickly. He struck fours off Amir and Wahab Riaz through the off side, but fell in the final Powerplay over, bowled by an Afridi delivery that came on with the arm.
Tamim had sent the first ball of that Afridi over for a six into the stands beyond midwicket and in the next over, he lifted Malik over extra-cover for another six. His third attempt at clearing the boundary, however, ended up as a simple catch to Imad Wasim at midwicket. Tamim has been Bangladesh's best batsman in the tournament so far and his dismissal for a 20-ball 24 snuffed out most of Bangladesh's hopes of chasing 202.
Bangladesh have never made more than 87 runs in the last ten overs of a successful T20I chase, so getting 133 today was well beyond their reach. The pressure of an asking rate of over 13 got to Mahmudullah, who played a slog-sweep to Sharjeel at deep square leg in the 11th over, and Bangladesh slid further.
Shakib was still at the crease but from a position of 71 for 4, he had to tackle the Pakistan attack as well as Mushfiqur Rahim's frustrating batting at the other end. Between the 11th and 17th overs, Mushfiqur played and missed plenty of times. In two separate overs, Shakib struck a four off the first ball but Mushfiqur couldn't score off the remaining deliveries. Mushfiqur also did not turn as much of the strike over to Shakib and the required run rate soared out of their reach. Mushfiqur became Amir's second wicket in the 17th over.
Shakib had been dropped by Shehzad at midwicket on 33 and he went on to reach his sixth T20I fifty in the last over.