Defending champions, Omar CC falls against Heroes CC by 8 wickets to book their place in the final of Karachi Gymkhana Omar Associates Ramazan Cricket Festival 2019 which is scheduled for today at KG Cricket Ground in Karachi. 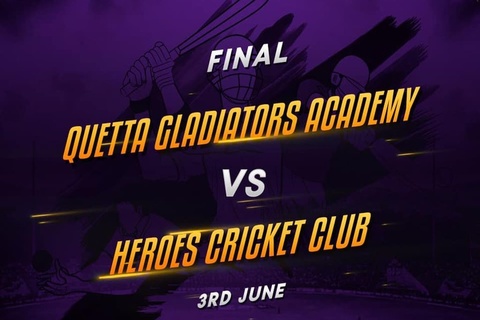 Opener Sami Ur Rahman’s scintillating unbeaten century powered Heroes Cricket Club Quetta  to overpower the defending champions, Omar Cricket Club by a resounding margin of eight wickets in the second semi-final match played into the tournament.
Unlike the low-scoring semi-final between Quetta Gladiators Academy and Eaton Cricket Club, the fixture between Heroes Cricket Club and Omar Cricket Club was a high-scoring. Batting first after winning the toss, Omar CC posted a fighting total of 153 for seven in the allotted 20 overs but Heroes CC needed only 15.1 overs to reach the target with Sami, later declared Man of the Match, playing a superb innings.
Omar CC’s plan of installing a formidable total was severely dented with their premier opener, Umar Akmal departing after scoring only 16 off 13 balls. His opening partner Muhammad Waqas (21 off 16 balls) did not last longer. Ramiz Raja stole the limelight with a breezy 43 off 26 balls.
Omar CC lost their way in the middle overs as Heroes Cricket Club’s spin trio of Sohrab Baloch, Wasim Qureshi and Khushdil Shah applied brakes by taking wickets. It was Danish Aziz’s unbeaten 27 off 23 balls which raised the total past 150.
There was anticipation of a close match at the halfway stage, but Sami had his own ideas. He finished with an unbeaten 109 off 57 balls, hitting six sixes and 10 fours.
With Quetta Gladiators Academy already having booked their spot in the final, this will be the first-ever all-Quetta final in the 34 years of this tournament.
Summarized scores:
*OMAR CC 153-7 in 20 overs (Rameez Raja 43, Danish Aziz 27 not out, Mohammad Waqas 21, Hasnain Bukhari 20; Wasim Qureshi 2-28, Tahir Wazir 2-30);
*HEROES CC 157-2 in 15.1 overs (Sami-ur-Rehman 109 not out, Fazal-ur-Rehman 25).