Karachi Gym­khana suffers fall against Quetta Gladiators by 8 runs, which earned the winners a spot in the semi-final stage of Karachi Gymkhana-Omar Associates Ramzan Festival Cricket Tournament 2019 which is being played at KG cricket ground in Karachi. 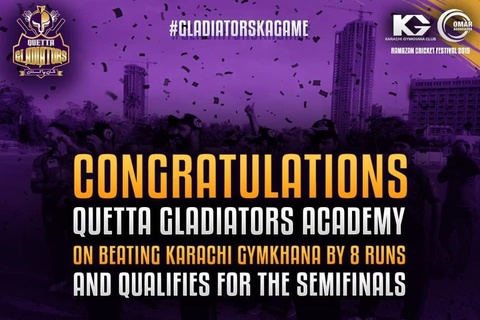 Quetta Gladiators Academy earned a hard fought victory against the hosts, Karachi Gymkhana by outplaying them on eight runs, earning a spot into the semi-finals of the tournament.
Salahuddin’s fine all-round performance played the decisive role in Quetta Gladiators Academy’s victory after a keenly contested encounter. Later he was also, adjudged Man of the Match.
Put into bat, Quetta Gladiators Academy managed 143 for eight in the allotted 20 overs but they defended it despite the heroics of Imran Nazir, restricting the hosts to 135 for nine off 20 overs.
Quetta Gladiators Academy seemed on track to a big total when opener, Naimat Khan (47 off 32 balls) and number three Salah Ud Din (17 off 20 balls) got them off to a flying start. They were jolted by the spin duo of Haider Ali (2-21) and Agha Salman (2-29) and it was Ghulam Haider’s unbeaten 31 off 22 balls, which lifted them to a fighting total.
Opener, Imran Nazir’s 50 off 30 balls, containing three sixes and five fours, and number three Agha Salman’s 25 off 14 put Karachi Gymkhana in a commanding position but Quetta Gladiators Academy pulled it back through off-spinner, Abdul Nasir (2-20), medium-pacer, Salah Ud Din (2-31) and left-arm spinner, Abdul Malik (2-35).

Other Quarterfinals Schedule:
1. Omar Cricket Club to lock horns with Alamgir Gymkhana in the second quarter-final today.
2. Eaton Cricket Club is to battle against Rangoonwala New Al Habib in the third quarter-final tomorrow.
3. Qasmi Gymkhana will be at clash against Heroes Cricket Club Quetta in the last quarter-final on Friday.
The semi-finals are scheduled over the weekend with the final due to be contested on Monday next week.