The eighth day of the 7th Corporate T20 Cup 2019 belonged to Omar Associates and Sui Southern Gas Company (SSGC) as they won their games easily. Both teams secured their place in the semifinal of the competition. 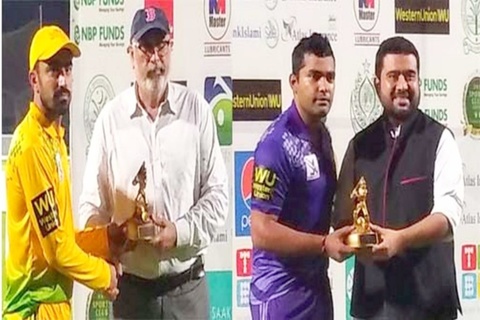 7th Corporate T-20 Cup 2019      DHA Sports Club(Moin Khan Academy), Karachi.
The 7th Corporate T20 Cup 2019 move into final stage as the eighth day of the tournament  belonged to Omar Associates and Sui Southern Gas Company (SSGC) as they won their games easily to secured their places in the semifinal of the competition.
In the first match, Pakistan Air force posted 176 for 3 against Omar Associates, thanks to M. Irfan’s 71 off 51 deliveries. Hussain Talat scored 33 off 31 balls and a 32 run cameo by Shahid Khan was the other notables. M Irfan from SSGC claimed two wickets.
In reply, it was all about Umar Akmal’s blistering knock of 93 off 48 deliveries. Umar’s explosive innings comprises of 8 Sixes and 5 fours. Umar and Usman Khan put 76 runs for the first wicket partnership, Usman made 33 off 24 balls. Other batsmen who lost his wicket was of Sohail Akhtar who added 18 runs. Hussain Talat and M Irfan picked up one wicket each. Omar Associates chased down the target of 176 in 16.4 overs with 8 wickets in hand.
Umar Akmal earned player of the match award on his entertaining knock.
In the second match, SSGC batted first against K-Electric and scored 161 in their 20 overs. Ahmed Shehzad topped the batting card with 50 off 28 deliveries, and equally well contributed by Adil Amin with 48 off 33 balls, While Mohammad Imran bagged 4 wickets for just 21 runs.
Chasing par score, K-Electric batting department completely collapsed and they kept losing wickets. K-Electric whole team could only score 95 and lost the game by 66 runs. Omair Bin Yousuf remains the top scorer with only 27 runs. Adil Amin from SSGC picked up a first five-wicket haul of the ongoing edition of the Corporate T20 Cup 2019.
Adil Amin received player of the match award for his all-round talent.
Matches are televised on Geo Super. The games are also streamed live on Goonj.pk (Sports Fever 360 Channel) and Official Facebook fan page of the DHA Sports Club Moin Khan Academy.