Pakistan Currency and Omar Associates claimed victories in their respective matches of Osaka Naya Nazimabad Ramzan Cricket Cup 2019 which is being held at Naya Nazimabad cricket ground in Karachi. 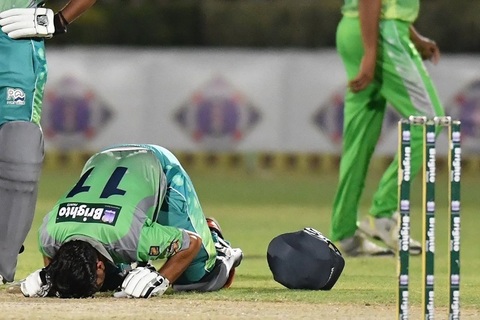 Osaka Naya Nazimabad Ramzan Cricket Cup 2019      Lawai Cricket Stadium, Karachi
Karachi Port Trust (KPT) and Pakistan Currency teams were up against each other in the first match of the 6th day into the tournament in which Pakistan Currency conquered Karachi Port Trust (KPT) by 51 runs.
After winning the toss and opting to bat first, Karachi Port Trust (KPT) wrapped but their first innings on a massive target of 239 score with 3 of their players out on 20 overs. Zakir Malik stood the only player in the match to score 107 runs on 40 balls while Junaid Ali and Iftikhar Ahmed with their 69 and 32 runs also contributed well in their teams win, respectively.
The opponent team had to fight hard to overcome the huge target imposed on them by the winner team to which, Pakistan Currency, in response, folded the second innings on just 188 runs with 7 outs as their performance kept on falling as the match proceeded to the end.
The second clash saw Omar Associates and Saima Builders teams battling for the victory of the game in which Omar Associates team won by 5 wickets.
Omar Associates team won the toss but elected to field first by which, Saima Builders players tried their best to give as much possible of a huge target to chase to the opponent team that ended up being them finishing the first innings on 154 runs with 6 outs by 20 overs.
In reply, Omar Associates dominated the batting line with the players best of skills and wrapped up the second innings on 155 runs on 5 outs by 20 overs.
KPT's Zakir Malik with his century on 50 balls was declared Man of the Match of the first encounter while Sohail Akhtar stood the Man of the Match from Omar Associates team.
Summarized scores:
First Game:
*PAKISTAN CURRENCY 239-3 in 20 overs (Zakir Malik 107, Junaid Ali 69 not out);
*KPT 188-7 in 20 overs (Nadeem Javed 40, Sajjad Hashmi 38, Rehan Tanoli 37, Mohammad Hasan 21; Iftikhar Ahmed 3-26, M. Imran Khan 2-44).
Second Game:
*SAIMA GROUP 154-6 in 20 overs (Misbah-ul-Haq 45 not out, Imran Nazir 34, Fazal Subhan 24; Usman Qadir 2-16);
*OMAR ASSOCIATES 155-5 in 18.4 overs (Sohail Akhtar 56, Khurram Shehzad 26, Saud Shakeel 24 not out; Nisar Ahmed 2-28).
As many as 16 teams have lined up to compete in this mega cricket event which is having two matches scheduled daily during the league phase with the first match starting at 08:00 PM sharp and the other at 12:00 midnight. The quarters-finals are scheduled for 23rd and 24th May while the semi-finals will be staged on 25th May, followed by the final on 26th May.