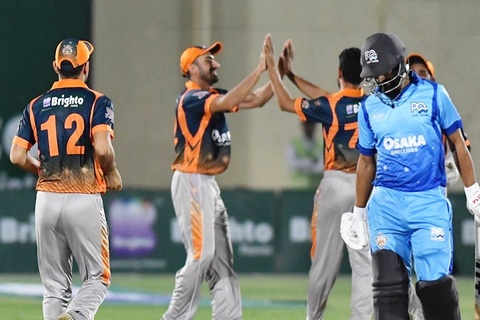 Usman Khan and Saud Shakeel batted superbly and Asad Shafiq bowled well to enable Omar Associates to overwhelm Agha Estate by 73 runs in their first game against each other.

After being asked to bat first, Omar Associates rode on the batting heroics of opener, Usman Khan (71) and left-handed batsman, Saud Shakeel (41) to pile up a huge total of 218-4 in the stipulated 20 overs. Usman, who hit four sixes and nine fours in his 43-ball knock, put together a 77-run opening stand with Umar Akmal who blasted a 19-ball 37 with three sixes and as many fours.
Saud hammered two sixes and four fours from 18 deliveries. Saim Ayub (29) and Khurram Shehzad (22*) also used the long handle to put their team in a commanding position. More successful players for the winner team stood, Mohammad Sarwar and Zeeshan Khan, who each got one wicket.
Asad Shafiq then got 3-16 in four overs to help Omar Associates restrict Agha Estate to 145-9. Opener, Sami Ur Rehman (27) and Fawad Khan (26) were the main contributors. Asad was ably backed by Mohammad Salman with 2-19.
In another outing at the same venue, Karachi Port Trust (KPT) defeated Alamgir Gymkhana by 38 runs. Sajjad Hashmi (68) and stumper, Mohammad Hasan (54) guided Karachi Port Trust (KPT) to 172-6 in the allotted 20 overs.
Sajjad hammered five sixes and as many fours in his 43-ball knock while Hasan clobbered three sixes and four fours from 30 deliveries. Nasir Awais then got 4-22 to dismiss Alamgir Gymkhana for 134. Ashir Ahmed made a 38-ball 42 with three fours.
As many as 16 teams have lined up to compete in this mega cricket event and these teams have been divided into four groups which are stated below:
Group A includes: Omar Associates, Pakistan Air Force (PAF), Agha Estate and Santex Group;
Group B comprises: National Bank, K-Electric, Al-Rehman Foundation and Saima Group;
Group C has: State Bank, Karachi Port Trust, Pakistan Currency and Alamgir Gymkhana;
Group D consists: SSGC, Port Qasim, Pakistan Customs and KK Panthers.
Two matches are scheduled daily during the league phase with the first match starting at 08:00 PM sharp and the other at 12:00 midnight. The quarters-finals are scheduled for 23rd and 24th May while the semi-finals will be staged on 25th May, followed by the final on 26th May.
The winner team will be awarded with Rs. 1.2 million worth of cash prize while the runner-up team will bag a prize pursue Rs. 600,000. The man-of-the-match of each game would get a motorbike.