The opening match of the 7th Corporate T-20 Cup 2019will be played between NBP and Momin Seeds at DHA Sports Club(Moin Khan Academy), Karachi. 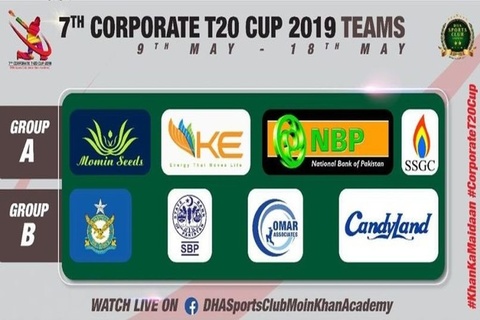 The opening match of the one of the biggest and most prestigious tournaments of Ramzan Cricket, 7th Corporate T-20 Cup 2019 will be played between NBP and Momin Seeds, today(10th May) on 11:00 pm at DHA Sports Club(Moin Khan Academy), Karachi.

Reigning Champions K-Electric will look to defend their title in the eight-team event as top cricketers of Pakistan will assemble to vie for the coveted crown.

“The departments have played an important role in the development of cricket in Pakistan and that is why we started this event several years back so that departments can get maximum exposure other than our domestic cricket,” Moin said.


“You always see departments preferring quality players in their ranks and that is the reason you have witnessed some amazing matches in Corporate T20 Cup. It will be no different this year as well with some of the leading cricketers of Pakistan expected to take part in the event.” he further added.