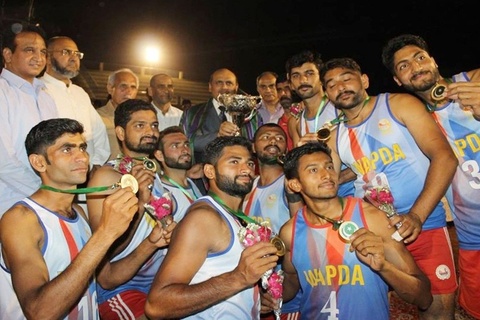 10th National Beach Handball Championship      Handball Stadium Agriculture University in Faisalabad.
The finalist two teams that were: WAPDA and Army, battled to win the title of the championship in the final game, in which the defending champions, Army team was not able to retain their title and fell to the strong WAPDA team and lost the match by a score line of 2-0.
Both the teams started in a whirlwind pace and the players were seen rushing all over the court with their full speed and talent in the sport and just when the match seem to tie in the first set, WAPDA claimed it just by a difference of one point that was: 17-16. But Army team could not keep up with the pressure tat was put on them by WAPDA players and the team finally lost the final match by 23-12.
Whereas the Punjab Whites won the third position after beating Railways by 2-1 with the scores of 15-10, 10-12 and 4-3. Police settled for the fifth spot beating Higher Education Commission (HEC) by 2-1 with the scores of 10-11, 15-12 and 8-7 and Punjab Greens managed to stand on the seventh place after beating Balochistan on 23-7 and 22-16 scores. Sindh finished ninth.
Muzammal Hussain and Asim Saeed were declared the best scorers for WAPDA with 42 goals each and Hazrat Hussain from Army was the awarded with the best scorer title also with 42 goals.
Earlier, a wheel-chair exhibition match for disabled persons was also played between Punjab Whites and Punjab Greens teams in which the Punjab Greens team won by 9-3 scores. An exhibition beach handball match was played between Afghanistan’s National Team and bronze medalists, Pakistan's Punjab team in which Pakistan won by set scores of 13-9 and 14-11.
Professor Dr Mohammad Ashraf, Vice-Chancellor University of Agriculture Faisalabad was the honorable guest along with Khalid Mahmood, Secretary General Pakistan Olympic Association (POA), and Mohammad Hanif, Vice-President, Pakistan Handball Federation, who witnessed these games being played and later awarded the high achievers with trophies and medals.
Pakistan Handball Federation organized the mega National Beach Handball Championship into the current year that marked its 10th edition. This championship featured a total of about nine (9) teams belonging to different departments and divisions of the country.
Participating teams were: Army, Water and Power Development Authority (WAPDA), Police,  Railways, Higher Education Commission (HEC), Balochistan, Khyber Pakhtunkhwa (KPK), Islamabad,  Sindh and Punjab.