Pakistan win over Indonesia to open their account on Group 3 Handball points table with a score of 28-23. 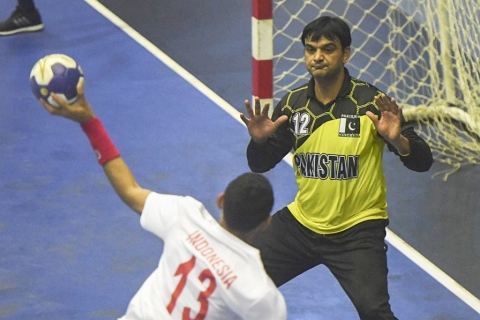 Pakistan got a lead late in the first period which ended 12-10 in Pakistan's favor. Pakistan bounced back from 2 goals down at 7-9 in the 21st minute, to leave the court with a 2 goals advantage due to some fine goalkeeping from Tahir Ali and teamwork from the outfield players who produced smart scoring moves.

Pakistan continued to build on their lead in the 2nd period and with some superb game play from Muzamal Hussain who scored quite a few assists and a number of 9m goals to further extended the lead to 20-15 by the mid of 2nd period. The all around performance by the Pakistan team helped score 16 goals in the 2nd period compared to 13 goals against it.

Goalkeeper Tahir Ali saved 13 of the 34 shots on goal. Breakup of Goals scored by Pakistan team is as below: