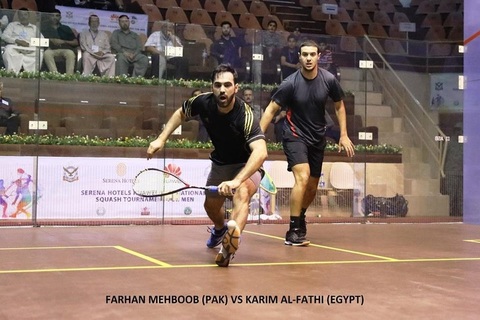 World rank no. 46, Fathi who earlier beat Asim khan in the quarterfinal, started the first game on a fast tempo and never let Islamabad born Farhan to settle down, thus Fathi took the first game at 11-5.

After losing so easily, Farhan started fought back in style and matches fire with fire before it was 7-8. Farhan, whose career best world ranking was 16 in May 2009 and has now slipped to 73, was in the best nick as he displayed outstanding squash skills against Egyptian player and win the second game by 11-9 to equalized the lead at 1-1.

Farhan, who was ice cool and was fully focusing on his mission, continued his aggressive approach as 4th seeded Farhan showed his class to make it 8-5. Farhan utilize his wide international experience and kept his composure and went onto win the third game at 11-8.

In the highly charged fourth game, Farhan applied all-out pressure and kept top seed engaged in long rallies and looked highly cautious and were not ready to hand over advantage to Fathi and dominated him well to win the game by 11-5 and book berth into the final with the score line of 5-11, 11-9, 11-8,11-5 in 38 minutes.

I’m very hopeful that I’ll win, I have a game plan for the final and I will be enjoying the home support as well.” Farhan said.

“It [victory] has reinvigorated me really, This was a much-needed one for my confidence. After losing the first game, I changed my strategy and started playing short strokes to keep Al Fathi on his toes and that paid off.”  Farhan further added.

In the second semifinal of the day, Egyptian Mohammed ElSherbini overpowered seventh seed and world No 81 Carlos Cornes Ribadas with the final score line of 11-9, 13-11, 11-3 in 39 minutes to book berth into the final of mega event.

Farhan will now face fifth seeded Mohamed ElSherbini of Egypt in the final on 10th April(Wednesday) at 3:30 pm (PST).