Kabul Zalmi won the Global Zalmi 2019 edition when they defeated Manama Zalmi in a one-sided final at MCI Cricket Stadium in Islamabad. 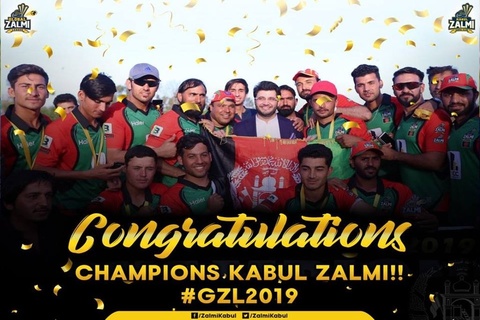 Global Zalmi League 2019      Islamabad
Kabul Zalmi won the Global Zalmi 2019 edition when they defeated Manama Zalmi in a one-sided final at MCI Cricket Stadium in Islamabad.
Kabul bowled out Manama for just 70 in 16.4 overs. Qareebullah took four wickets for 13 runs. He was awarded the man of the match award. Shehriar scored 18 from Manama.
Kabul chased down the target in only six overs without any loss of wicket.
Both teams had been playing superbly in the tournament but Kabul was the better side in the final. Chairman Javed Afridi, Head Coach Mohammad Akram, Adviser to PM Usman Dar and Peshawar Zalmi superstar Umer Amin handed over the trophy and prize money to the winning captain.
Chairman Javed Afridi said on the occasion: "It was amazing to have these 16 teams in Pakistan. We hope they had a great time and we look forward to hosting them next year as well. GZL 2020 will be bigger and better as we will add four teams and make a total of 20 teams."
Javed thanked deputy mayor Islamabad Zeeshan Ali Naqvi, who was also among the esteemed guests at the closing ceremony.
Akram congratulated both the teams and said he was impressed by the quality of cricket in the tournament. He also said that Peshawar Zalmi management would work to design a strategy to further develop cricket in their respective countries.
Peshawar Zalmi management said it was grateful to MCI Corporation Islamabad for its support throughout the tournament. The competition had started on March 21.