Murad ousted WAPDA’s Azeem Sarwar while Ali made it to the final after his opponent Aoun Abbas retired in the National Badminton Championships at Nishtar Park Sports Complex, Lahore. 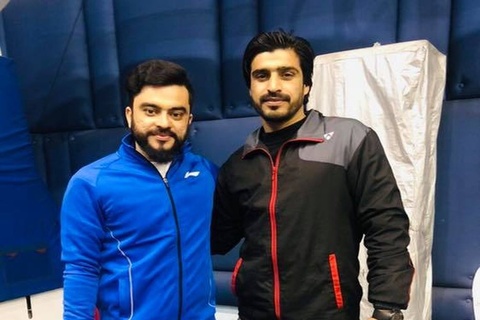 56th National Badminton Championships 2019      Nishtar Park Sports Complex Lahore
Ghazala Siddique of Sui Northern Gas Pipelines Limited (SNGPL) and WAPDA’s Saima Waqas secured the women’s doubles crown with a straight sets win over the WAPDA pair of Sehra Akram and Huma Javed in the National Badminton Championships at Nishtar Park Sports Complex, Lahore.
Also, the National Bank of Pakistan (NBP) duo of Rizwan Azam and Sara Rizwan lifted the mixed doubles title, beating Wapda’s Sehra and Awais Zahid in straight sets.
While Ghazala set herself for a shot at another title as she made the women’s singles final against WAPDA’s Mahoor Shahzad, Sehra suffered three defeats on the day as she fell in the singles semi-final.
The men’s final will be contested between NBP’s Murad Ali and Ali Mehdi of WAPDA today at Nishtar Park Sports Complex, Lahore.
Ghazala and Saima outfought Sehra and Huma in a 38-minute contest, prevailing 21-17, 21-15 thanks to their aggressive stroke play and superb serve. Rizwan and Sara, meanwhile, sailed past Sehra and Awais 21-12, 21-14.
Sehra put up little resistance against Mahoor in their last-four singles clash as the latter cruised to a 21-8, 21-5 victory but the other semi-final was a tantalising match-up as Ghazala was taken the full distance by WAPDA’s Aneela Irshad. Ghazala eventually won 22-20, 18-21, 21-13.
Murad ousted WAPDA’s Azeem Sarwar 21-15, 21-15 in their semi-final clash while Ali made it to the final after his opponent Aoun Abbas retired with an injury having lost the first set 18-21.