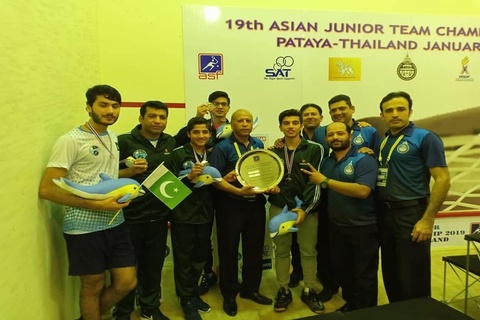 The final proved a one sided affair where the passion and dedication of Pakistan’s youngsters helped them to claim the title as the top seeded Pakistan defeated fourth seeds India by 2-0 to win the 19th Asian Junior Squash Team Championships 2019 in Pattaya, Thailand.

In 55 minute battle of the first match, Farhan Hashmi started the final proceedings against Veer Chotrani where Farhan, who is lowest ranked player in Pakistani team with almost all his matches in the tournament going into five games, was nowhere in the first game which was easily won by Chotrani 11-2. Farhan fought back well in the second game and matched fire with fire. It was highly tense game and could have gone either way, but fortunes favoured Farhan as prevailed and took the game 11-9.

The Pakistani lad continued the good run in the third game as well and kept the Indian under tremendous pressure, which helped him take the third game 11-7. In the fourth game, Farhan let the things slip out of his hands and allowed his opponent too much room and liberty. Chotrani, who was enjoying great support from huge crowd, availed the opportunity offered to him by the Pakistani to win the fourth game 11-5, thus forced the tie into the fifth and decisive game.


Both the players showed tremendous fighting skills and top class squash in the last game. Both fought for each and every point and it was see-saw battle between the archrivals in the court. Pakistani management and players were cheering loud and urging Farhan to finish off Chotrani, while Indian management and massive crowd was right behind Chotrani. Farhan, played like a true champion and with a boosted moral which helped him take the decisive game 11-9, thus giving Pakistan 1-0 crucial lead in the final.

In the second match, Pakistani lad Abbas Zeb was hot favourite to beat Utrkash. Indians were looking down as they also realized that Pakistan had better chances of winning the title as Abbas was better player than Utrkash. As per expectation, Abbas played phenomenal squash and simply outclassed his rival. Abbas took the first game 11-4 and routed Utrkash in the second game to take it 11-2. In the third game, it looked like a world champion is playing against a student as Abbas was toying with Utrkash who finished off in style to take the game 11-6, thus ensured 14th times title in Pakistan’s grasp.

Soon after his victory, the entire Pakistani contingent including PSF secretary Tahir Sultan and coach Fazal Shah, rushed to the court and bowed down in the center of the court to pay thanks to Almighty and started raising slogans “Pakistan Zindabad”.