Haris Qasim helped Pakistan to win over the arch rivals India by 2-1 in the 19th Asian Junior Squash Championship which is being staged at Pattaya in Thailand. 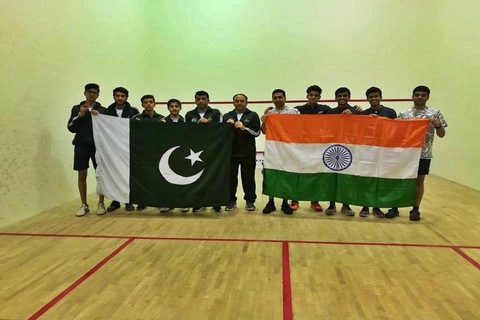 19th Asian Junior Squash Team Championship 2019      Ambassador City Jomtien Pattaya, Thailand
Pakistan got off to a flying start against India by winning the first match as Pakistan’s number one junior player Abbas Zeb defeated Utkrash Behtei by 3-2. Abbas survived close scare before registering the victory. Abbas took the first game 11-8, but after that, it was Utkrash who put Abbas under pressure by winning the second game 11-8 and third by 11-7. In the fourth game, Abbas played with composed form which helped him in winning it on 11-6. In the fifth game, both the players played with their full potential but Utkrash spoiled many chances to wrap the game, but it was Abbas who benefited from the opportunities and  bagged the game 11-9 to give Pakistan 1-0 lead.
Farhan and Tushant were up against each other in the second match in which Tushant won the first game 11-9 and took second as well at 11-8. Farhan then bounced back well and won the next two games 11-8 and 12-10 to force the tie into fifth and deciding game, where he failed to carry the momentum and lost it 6-11.
The tie was all left on the shoulders of Haris Qasim to salvage pride for top seeds in which he was up against Veer Chotrani. Haris lost the first game 10-12 and second game 6-11. The Pakistani youngster showed quite a good game and got successful in staging a highly unbelievable recovery after going 2-games down and also injuring his ankle. Haris won the third game 12-10. To his great credit, Haris came back to play fourth game and won it 12-10 to force the tie into fifth game, which he won 11-6 to give Pakistan 2-1 victory and stay on top of Pool-A.
Pakistan team consists of Abbas Zeb, Haris Qasim, Farhan Hashmi and Muhammad Hamza Khan along with officials Tahir Sultan (manager), Hussain Ohwani and Fazal Shah.
Total 12 teams are taking part in the championship, who are divided into two pools. Pakistan is placed in Pool A along with archrivals India, Korea, Thailand, Sri Lanka and Chinese Taipei while Malaysia is placed second seed in Pool B which include Hong Kong, Singapore, Japan, China and Kuwait.