Pakistan notching up three back-to-back victories as the top seed Pakistan in their third pool match earned a convincing 3-0 win against Korea in the 19th Asian Junior Squash Championship 2019 at Pattaya, Thailand. 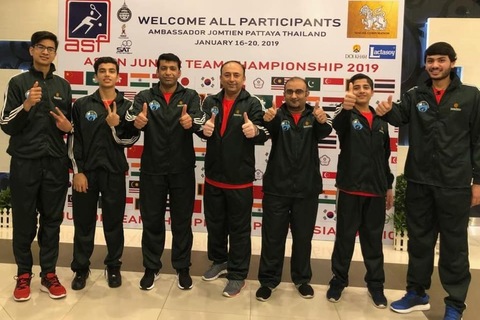 19th Asian Junior Squash Team Championship 2019      Ambassador City Jomtien Pattaya, Thailand
Pakistan team continue winning streak in the 19th Asian Junior Squash Championship as they notching up three back-to-back victories as the top seed Pakistan in their third pool match earned a convincing 3-0 win against Korea in Pattaya, Thailand.
Pakistan are hot-favourites to win the title as they have all the stuff required at this level. Abbas, Haris, Hamza and Farhan Hashmi have loads of experience, while they just returned after playing in US and British Junior respectively. All the other teams have sent relatively inexperienced teams, while Pakistan didn’t send female team in the tournament.

In the first match, Pakistan’s number one junior playe Abbas Zeb started proceedings against Kim Seokjin . Abbas simply toyed with Kim and kept him under tremendous pressure right throughout the match. Abbas took the first game 11-2 and won the second 11-7. Huang managed to earn four points in third game, but Abbas then shut the doors on him, winning the game by 11-4 to give Pakistan perfect start in just 21 minutes.
Haris Qasim played second match against Lee Minwoo . Haris won the first game at 11-8 while lost the second & third at 3-11. Haris then came from behind and  showed some fighting skills and kept Lee under pressure for the majority of the gamed to win the fourth and fifth game by 11-8, 13-11 to provide Pakistan 2-0 unbeatable lead.

In the third and dead rubber, Pakistani coaching staff gave chance to talented Muhammad Farhan Hashmi against Yu Jeongmin.
Farhan started well and took the first game 11-4 with utmost ease and comfort.  The second game was also played on high tempo and both were involved in long rallies and fought for each and every point, before Farhan winning the game 11-2 while in the third game, and after a tough fight, Farhan won it 11-8.

Pakistan take on traditional rivals India in their fourth matches at 1:00 pm (PST).
Pakistan team consists of Abbas Zeb, Haris Qasim, Farhan Hashmi and Muhammad Hamza Khan along with officials Tahir Sultan (manager), Hussain Ohwani and Fazal Shah.
Total 12 teams are taking part in the championship, who are divided into two pools. Pakistan is placed in Pool A along with archrivals India, Korea, Thailand, Sri Lanka and Chinese Taipei while Malaysia is placed second seed in Pool B which include Hong Kong, Singapore, Japan, China and Kuwait.