Sindh suffered heavy defeats 10-0 and 19-1 by its respective opponents on the 2nd day of 15th Khawar Shah National Women Baseball Championship which is being played at Aashiq Hussain Baseball Stadium, Lahore. 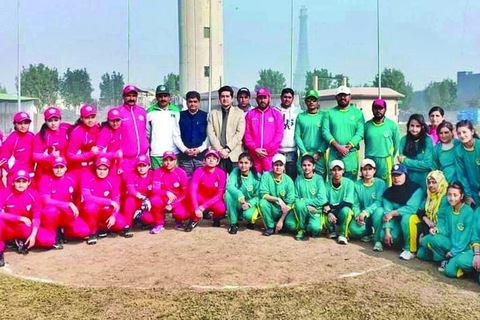 As the 15th Khawar Shah National Women Baseball Championship progressed on its second day, three more matches were played among the participating teams in which the very first match saw Sindh team badly going down by Army’s baseball team on a 10-0 score-line.

Army’s star players were Atia Saif who scored twice for the team while Atia Ishaque, Iram Khalid, Fariha Pervaiz, Humaira Khan, Asia, Rabia, Rashida and Zahida with their 1 run each.
The second encounter saw HEC and Punjab teams battling for the win but HEC came out much stronger defeating the opponents by 17 – 7.
Ghazala, Saba, Musharaf and Raheela, Ammara, Rabia, Aqsa and Minahil contributed in the big win for HEC while Aisha, Khizra, Mariam, Nimrah, Asma and Sadaf tried their best to win but failed at the end as they were the main players to score in the match for their team.
Yet again Sindh’s baseball team lost on a huge score difference to KPK team 19 – 1 as Kainat, Afsheen and Naila were the key players scoring 3 runs each with the contribution of Haseeba, Neelam, Shawal and Yusra’s 2 runs each and also Raheela and Asia’s scores of 1 run each. Whereas Hina Moin was the sole player to score for Sindh’s side.
Mr. Wisal Muhammad, Secretary General Pakistan Archery Federation/Vice President Pakistan Federation Baseball was the honorable chief guest in the presence of Syed Fakhar Ali Shah, President Pakistan Baseball Federation (PFB), who witnessed matches on the second day of the championship.

Schedule for matches to be played today: