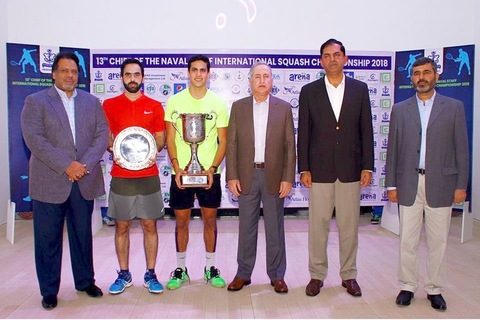 13th CNS International Squash Championship 2018
Two-time former CNS Champion Farhan Mehboob fetched US $2,052 and runner-up trophy of CNS International Squash Championship 2018 at the PN Roshan Khan-Jahangir Khan Squash Complex ,Karachi.
The first game started on a brisk pace as both the players tried to seal early initiative. Farhan, as all know, is a slow-starter, while a few referee’s calls also went against him, which upset him and he lost the concentration, which allowed Youssef to take first game 11-7.
The second game also started on electrifying pace and Farhan soon took control, but once again a few close calls went against him and the entire tempo of the game shifted towards Youssef, who claimed the game 12-10.
The third game was also a close affair, but once again, the poor refereeing spoiled Farhan’s focus and Youssef, who never needed any second invitations, sealed the fate of the game 11-8, thus won the final in 32 minutes.
Riding on the crest of a wave, unseeded Egyptian Youssef Ibrahim carved out a victory over third seed Farhan Mehboob by 3-0 with the final score line of 11-7, 12-10, 11-8 in the final to clinch his maiden international squash title in Pakistan.

“I’m happy on my triumph and that too, in Pakistan which has produced numerous world class players including maestro Jahangir Khan,”Youssef Ibrahim said.

An elated world No 71 Ibrahim said he has maintained consistent run on the PSA circuit and aiming to join the top players in the near future.

“This is my sixth title of the year that will further improve my ranking,” Youssef further added.

Commenting on the final the Egyptian said with the exception of second game he didn’t get much resistance and won according to plans.
Praising hosting of the PSA circuit in Pakistan he said it’s a good omen and hoped the efforts will unearth good players in the country.

“Though I couldn’t win yet I’m pleased by making it to the final and improving world ranking,” two-time former CNS champion Farhan said.

Recalling the country’s golden era of the game he said there was a time when Pakistan dominated the top 10 rankings in the world but now we hardly find them among the top 100.
Asked about the final he said some umpiring decisions went against him.
Incidentally, the final coincided with the 55th birthday of the squash legend Jahangir Khan.
The Egyptian received a purse of US $3,249 and winning trophy while the Pakistan fetched US $2,052 and runner-up trophy.
The Chief of the Naval Staff (CNS) Admiral Zafar Mahmood Abbasi, who graced the final, gave away the prizes.
Commander Karachi Rear Admiral Asif Khaliq, Jahangir Khan and tournament director Habib-ur-Rehman were prominent among others who were also present.