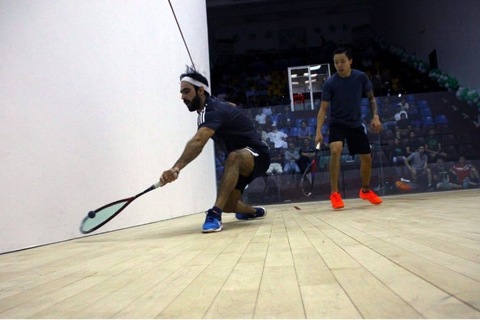 13th CNS International Squash Championship 2018
Egypt’s unseeded Youssef Ibrahim seems destined for maiden glory in Pakistan when he faces third seed Farhan Mehboob in the final of 13th CNS International Squash Championship at the PN Roshan Khan-Jahangir Khan Squash Complex, Karachi.
Former Pakistan No 1 Farhan Mehboob made yet another upset in the $18,000 13th Chief of the Naval Staff (CNS) International Squash Championship 2018 by ousting second seed Asim Khan 3-1 in the semi-finals played at Pakistan Navy Roshan Khan Jahangir Khan Squash Complex, Fleet Club Saddar Karachi.
Farhan, whose career best world ranking was 16 in May 2009 and has now slipped to 77, was in the best nick and gave a tough time to Asim and earned most of his winners through backhand shots.
The first game started with both players keeping each other engage in long rallies and both looked highly cautious and were not ready to hand over advantage to other. Farhan did have chances to wrap up the game much early, but like witnessed so many times, when Farhan is on a roll, he mostly get relaxed and allow opponents too much space and freedom.
Same happened again and Asim not only closed the gap, but could also have won the first game, but Farhan woke up timely and claimed the first game 12-10.
It was once again dominating Farhan in the second game, who played powerful and clever drop shots to wrap up the second game 11-5. After going 2-0 down, Asim settled down and started playing his natural game, which helped him put Farhan under pressure and win the third game 11-8.
In the fourth game, both the players played some lovely squash and were duly applauded by the crowd. Asim was looking in a hurry to unnerve Farhan, who was ice cool and was fully focusing on his mission. Farhan then changed his gears and tamed spirited Asim 11-8 to register victory and booked berth in the finals.
Farhan fought courageously to stun second seed Asim Khan in the other all-Pakistan pre-final with the final score line of 12-10, 11-5, 8-11, 11-8 in 54-minutes battle.

The semi-finalist of the DHA Cup, Ibrahim, who is making waves, reached a sixth final of the year by getting the better of seventh seed Shahjahan Khan of Pakistan straight 11-8, 11-4, 11-3 in the first semi-final that lasted little over half-an-hour on the penultimate day.
With five titles under his belt this year, the 19-year-old left-hander Ibrahim who toppled Arturo Salazar, the top-seeded Mexican in the quarter-final the other day, maintained his pace against Quetta-born Khan who had won a PSA Tour at Canada last month.
The Egyptian, who was ranked 130 last month, has leaped 59 places to attain 71st slot in the latest PSA rankings.
It is pertinent to mention that Khan had made it to the last four demolishing fourth seed Ammar Altamimi of Kuwait in quarters on Saturday.
The final between Youssef Ibrahim and Farhan Mehboob will be played on Monday at 1:40 pm(PST). Chief of the Naval Staff Admiral Zafar Mahmood Abbasi will grace the occasion.