All set to host US$18,000 CNS International Squash Championship 2018 from 6th Dec 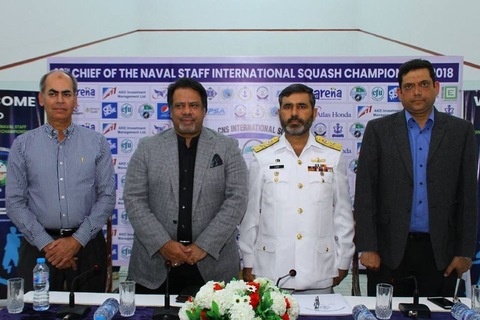 13th CNS International Squash Championship 2018
After two weeks of hustle and bustle at the DA Creek Club, the scene has been shifted to the Pak Navy Roshan Khan Jahangir Khan Squash Complex, Karachi where the US$18,000 13th CNS International Squash Championship 2018 begins on Thursday(6th Dec).
The first CNS Squash Tournament was played in the year 2000 with prize money of US$ 6000 and it has been increased with the passage of time with an aim to promote the game and to bring the best world players to this court. This year an amount of US$ 18000 has been earmarked as prize money for the tournament.

The five-day event that culminates on Dec 10 will see 12 foreigners from eight nations and as many Pakis­tanis vying for honours.The foreign players who will participate belong to Egypt, Hong Kong, Iran, Kuwait, Malaysia, Mexico, Portugal and Qatar.
World No 45 Arturo Salazar from Mexico is top seed while Pakistan’s Tayyab Aslam, Asim Khan, and Farhan Mehboob are second, third, and fourth seeds, respectively.
Kuwait’s Ammar Altamimi is fifth seed, Rui Soares from Portugal sixth, Daniel Mekbib from Czech Republic seventh, and Ahsan Ayaz from Pakistan eighth.
The other seeded players are Shahjahan Khan, Israr Ahmed, Farhan Zaman, Amaad Fareed, and Syed Ali Bokhari from Pakistan; Chi Him Wong and Tsz Kwan Lau from Hong Kong; and Youssef Ibrahim from Egypt.
Men’s and women’s competitions ran concurrently in the preceding two events — DHA Cup and the Pakistan Open — but the CNS spectacle is restricted to men’s.
In 2016, Egyptian World No. 30 Zahed Mohamed won 12th CNS International Squash Championship after a fierce final with another Egyptian player Omar Abdel Meguid at the Mushaf Squash Complex, Islamabad.