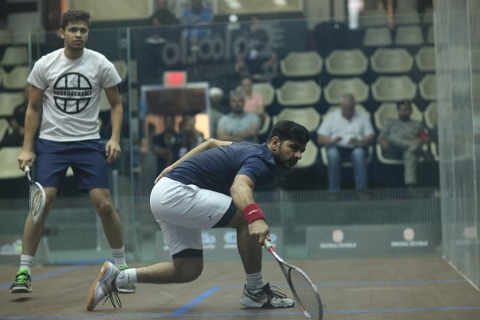 Golootlo Pakistan Open Squash Championship 2018      Karachi, Pakistan
Pakistan’s Tayyab Aslam, runner-up of the preceding DHA Open, and Amna came from the jaws of defeat their respective opponents on the opening day of the Pakistan Open Squash Championship at the DA Creek Club’s Asif Nawaz Squash Complex, Karachi.
In the match that lasted for 74 minutes, the unseeded Asim gave the higher-rated Tayyab a run for his money. It was a see-saw encounter with Asim drawing first blood by winning the opening two games 13-11 and 11-9. But the world No 54 Tayyab bounced back with a vengeance, displaying nerves of steel to win the next three games 12-10, 11-8, 11-6 to enter into the next round of the tournament.
The 22-year-old Aslam is due to meet top seed Egyptian Karim Abdel Gawad in the second round fixture on Thurday(29th Nov).
It could have been a gloomy opening day for the host country but young wildcard Amna Fayyaz brightened it up for local fans when she caused the biggest upset of the Pakistan Open Squash Championships here at the DHA Asif Nawaz Squash Complex on Wednesday.
On a day when most of her male counterparts fell by the wayside in the US$53,000 men’s event of the Pakistan Open, Amna dazzled in her first round match against 9/16 seeded Serbian Jelenia Dutina, winning it in straight games.
Amna, who is one of the most promising youngsters in the country, took just 30 minutes to knock out Jelenia 11-6, 13-11, 12-10 to ensure some Pakistani presence in the next stage of the women’s championship which carries a prize purse of US$18,000.
She was joined in the second round by seeded compatriot Madina Zafar, who defeated compatriot Zoya Khalid 11-5, 11-6, 11-6 in just 16 minutes.In the men’s event, Tayyab Aslam was the sole Pakistani survivor after winning a marathon five-game battle against compatriot Asim Khan.
Sindh Governor Imran Ismail, flanked by squash legend Jahangir Khan, cut the ribbon to formally inaugurate the prestigious event which is taking place in the city after 13-year.

“It’s a good omen that the high-profile event is being held in the metropolis after over a decade and will portray a bright picture of the country,” Imran Ismail said.

"Prime Minister Imran Khan is also a sportsman whose vision is to promote healthy activities across the country" he further added.