All set to host US$71,000 Golootlo Pakistan Open Squash Championship 2018 after 13-years 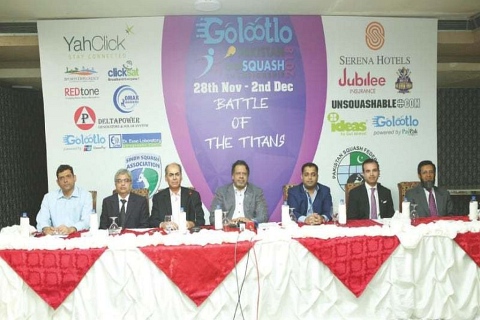 Golootlo Pakistan Open Squash Championship 2018      Karachi, Pakistan
The 2018 Golootlo Pakistan Open Squash Championships will take place from 28th November to 2nd December 2018 at the Asif Nawaz Squash Complex, DA Creek Club,Karachi.
The Men's Squash Tournament is part of the PSA World Tour 2018/19 calendar and belongs to the Bronze category of PSA World Tour .
It is for the first time in 13 years that the Pakistan Open once counted among the leading tournaments on the international squash circuit  will be played in Karachi.
The event was last staged here in the summer of 2005 when Frenchman Thiery Lincou defeated Australia’s David Palmer in the final to win the coveted crown.
Egypt’s former world champion Karim Abdel Gawad headlines a stellar cast in the US$53,000 which will be played from November 28-December 2. The women’s Pakistan Open will be played concurrently carrying a prize basket of US$20,000.
“We can say with a lot of pride that our efforts to bring major international action back to our country are now paying off,” said Jahangir Khan, the man behind the return of the Pakistan Open to Karachi. The squash legend, who won the inaugural edition of the Pakistan Open in Karachi, is chairman of the tournament’s organising committee.
Click here to view Golootlo Pakistan Open Squash Championship 2018-Draws

Ahsan Ayaz and Noman Khan were given wildcards in the men’s category while Amna Fayyaz and Noor-ul-Huda got wildcards in the women’s category.
Despite security concerns which have over the years kept international sports persons away from Pakistan, the event’ organisers have managed to attract 48 international players from 13 countries for the Pakistan Open events.
In the 24-man draw of the main event, Egypt’s Gawad is the top seed. Ranked No. 9 in the world, Gawad was placed at No.1 in the international rankings last year. He also won the 2016 World Open in Cairo. Peru’s Diego Elias, currently ranked No. 11 in the world, is the second seed. There are several other leading players from Malaysia, Mexico, Qatar, Spain and England featuring in the tournament.
Tayyab Aslam, who lost the preceding DHA Cup final to Malaysian Ivan Yuen, and Asim Khan are the two other seeded Pakistanis in the main draw.
Madina Zafar, Sadia Gul, Riffat Khan, Anam Mustafa Aziz and Zahab Kamal Khan have been directly placed in the women’s main round.
The men’s event carries a handsome prize money of US$53,000 while US$20,000 have been set aside for women’s competition which has been launched for the first time.