Army, Waziristan Taekwondo Club and PAF clinched most gold medals on the 4th day of 13th Korean Ambassador National Taekwondo Championship which is being contested at Liaquat Gymnasium, Pakistan Sports Board in Islamabad. 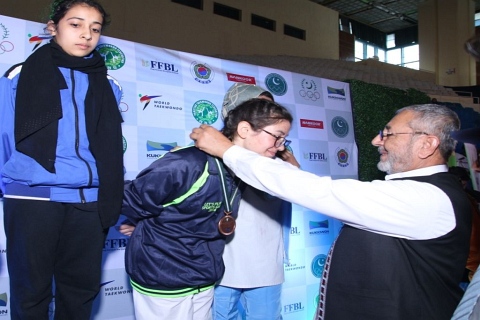 Fighters belonging to Pakistan Army were eager to stand at the top in as many competitions as possible and they did a lot of effort to make this desire of them come true by etching their named at the top of the score-table in Senior Poomsae Competitions as Army was declared the first position holder with 15 gold medals and 1 bronze medal managing a shocking total score of 231 points. Whereas WAPDA and HEC stood at the second and third positions with 92 and 72 points in total respectively, in the same category contests.

Whereas Waziristan Azmaray Taekwondo Academy stands at the top with clinching 3 gold, 2 silver and 2 bronze medals. Abu Hurrera and Alishba accomplished wins with one gold medal each in U-61 kg Male event and U-36 kg Female event of Khyrogi category under-17, respectively.
However, the third place in U-14 Khyrougi/Poomsae competitions went to Air Force as Danish and Nihal managed to name 1 gold medal each in U-16 kg and U-45 kg Male event.
Raja Khurram Nawaz, MNA (PTI), Ahmed Fadel Yalduh, HE Republic of Egypt, Syed Asim Shah, President Ring of Pakistan and Umer Toor, CEO Pakistan Professional League were the reputable chief guests and guest of honor who distributed prizes and medals to all the winner of the championship.