Army and WAPDA dominated the 3rd day of the on-going 13th Korean Ambassador National Taekwondo Champ¬ionship which is being held at Liaquat Gymnasium, Pakistan Sports Board in Islamabad. 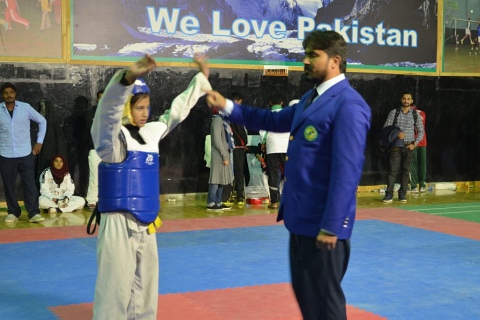 On the 3rd day of the championship 20 x events of U-14 and U-17 years of age for both male and female categories were contested in the Senior Khyrougi event in which WAPDA and Army players worked hard and earn themselves and their department the most gold, silver and bronze medals. Both departmental teams and individual fighters stand at the top 3 out of 9 competitions.

Haroon Khan, Mehmood Khan and Muhammad Faheem bagged gold medals for WAPDA in Under 58 kg Fly weight, 63 kg Bantam weight, 68 Feather weight categories respectively.
Whereas for Army, Suleman struggled to win gold in Under 74 kg Light weight event while Afnan Shah and Sajjad Hussain won golds in Under-87 Middle weight and Over-87 kg Heavy weight categories, respectively.
In the male U-14 category, Abu Hurrera of Waziristan and Javeria of KTA Club in the female U-14 category, clinched one gold medal each.
PAF and other participating fighters also performed well as Shahzaib of PAF managed to win one gold medal in Under-54 kg Fin weight category and Tahir Ali of Railways fought hard but was not able to win a gold medal but settled for silver instead in the same category.