Pakistan lost 3-1 to Thailand in the Classification 7 - 8 match at the 18th Asian Games, Indonesia. 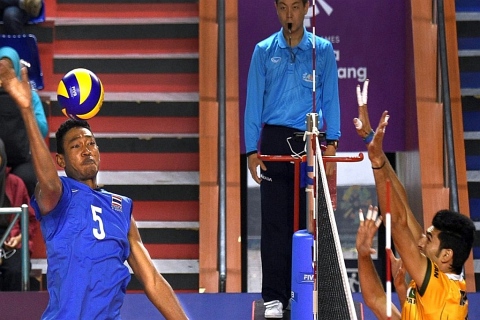 Pakistan started the match with the opening serve and lead from the start in the first set as they cruised to 5-1 lead. Thailand then narrowed the lead to 11-10. Some fine blocking from the Pakistani side helped them take a decisive lead to 21-15 as Pakistan sealed the first set comfortable at 25-20.

In the second set, the two teams matched each other point-for-point at they leveled at 7-7. Pakistan then made a break with 4 consecutive points to lead at 7-11. Pakistan maintained the lead with a fine overall game as they commanded at 16-19 and later at 19-22. A couple of loose points involving Murad Jehan helped Thailand equalize at 22-All. Pakistan tried to close the set with another point to again get ahead at 22-23, but the momentum has already sifted away from the under-pressure Pakistan Team. Muhammad Idrees netted the serve at the crucial moment and Thailand seized the opportunity to seal the set at 25-23.

In the 3rd Set, both the teams gained a lost 2-point leads in the start but leveled at 10-All. The tight set saw the teams match each other throughout and gave away no loose points at they leveled at 23-23. Thailand was first to get the Set-Point but Aimal Khan came to the rescue as Pakistan saved the set-point and equalized again at 24-All. It was Pakistan's turn to get in lead as Murad Jehan successfully blocked the Spike to give Pakistan a lead at 24-25. Thailand came back from behind and earn second set-point at 26-25. Pakistan saved the set point but could not edge out Thailand as they won the set at 28-26 in 27 minutes.

Thailand was leading the 4th set from the start and had a 4 points lead at 10-6, which was further extended to 13-8. Pakistan narrowed the lead to 2 points at 15-13 but could not match the performance from Thai players as they took the match away from Pakistan at 20-15. Thailand won the set at 25-21.

Aimal Khan contributed the most for Pakistan followed by Jehan Murad. Muhammad Idrees made a notable performance at Blocking.