Pakistan marked another win in their match against China by 3-2 in the Volleyball event at the 18th Asian Games being played in Jakarta, Indonesia. 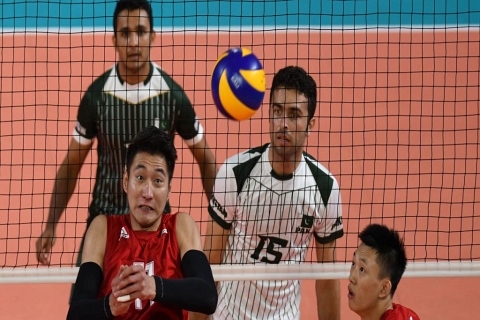 18th Asian Games 2018      Gelora Bung Karno Main Stadium, Jakarta
Pakistan grasped three sets 28-26, 25-19, 18-16 victory over China in their semi-final for 7th to 12th position in the Volleyball competition.
Pakistan opened the first set with Jehan Murad’s serve on which China took advantage and goaled the first ever point of the match on spike. First goal from Pakistan’s side was scored by Aimal Khan on 2-1. Pakistan did not start on a good pace which benefited the Chinese team who closed the first set on 25-17. But Pakistan did not stay behind and came back putting their true potential in the game by smashing the first point and took the lead on 10-9 at the 9th minute. Pakistan kept leading on 14-14 but fell one point behind crucially but that fall lasted not for long and Pakistan gained the momentum and leveled the score on 19-19 and shortly wrapped the second set on a close call of 28-26.
Third set started in Pakistan’s favor leading till the 6th minute. The third set had enough ups and downs from both the teams but China dominated closing it in their favor on 30-28. Pakistan got the early advantage in the fourth set when they got an initial lead on 19-15. Pakistan’s score kept on extending till the dying minutes and cruised to a comfortable third set win on 25-19.
Both the teams had a tough play in the fifth and final set of 15 points in which Pakistan Men’s Volleyball team put all their effort to maintain their pride after winning against India two days before, ending the last set in their favor on 18-16 and making their way to the final.
Aimal Khan top-scored with 88 points making the highest cap for Pakistan, supported by Muneer Khan’s 51 and Jehan Murad’s 48 most points. Pakistan registered yet another incredible win against 6 time winner China in the 18th Asian Games. Pakistan previously won two volleyball matches against Mongolia and India.