Pakistan registered second win in the baseball event against Indonesia in the 18th Asian Games being played in Jakarta, Indonesia. 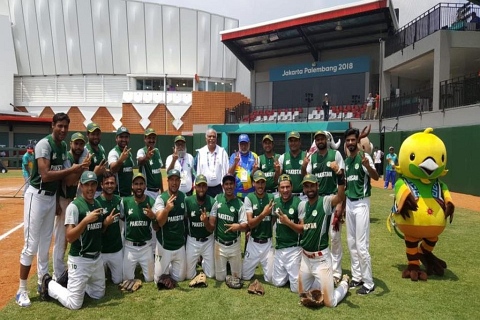 18th Asian Games 2018      Gelora Bung Karno Main Stadium, Jakarta
Baseball men's team consolation round – match one was played between Pakistan and Indonesia today in which Pakistan went undefeated to win their second match that was staged at Rawamangun Baseball Field in Indosnesia.
akistan made a fine start into the game and kept on attacking the Indonesian players to consolidate the lead of 6-2 after the 6th inning. Faqir Hussain, Fazal Khan and Jawad Ali scored 2 run each while Arsalan Jamshaid, Ubaid Ullah, Muhammad Zakir and Muhammad Rafi scored 1 run each. Zakir and Jawad were the players to hit home runs.
Pakistan stunned the host team Indonesia sealing a crushing 10-2 victory in their fourth match at the games. Pakistan had previously lost to Japan 15-0 and China 16-3 but registered the first win against Thailand by 8-1. After 17 years Pakistan won against Indonesia in the baseball game. Back in 2001 Pakistan faced the defeat by the same team in Asia Cup.
Pakistan will face Hong Kong in men's team consolation round – match three, who won their first match against the hosts Indonesia while lost to Chinese Taipei and South Korea in other two matches. The match will be played at 06:00 AM Pakistan Standard Time, tomorrow.
Pakistan has secured the 6th place out of the ten teams participating in the 18th Asian Games.