AB de Villiers has refused to commit his long-term future to Test cricket despite being named South Africa's stand-in captain and has warned that leading players will leave international cricket behind unless there are significant changes within the game. De Villiers, who was reported to be considering earl 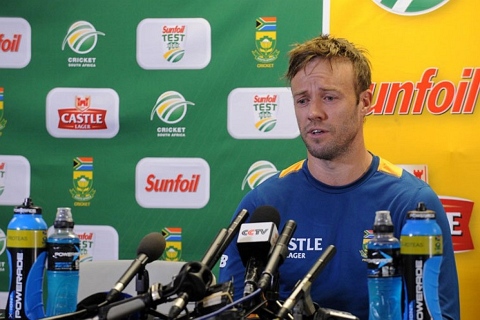 "There have been a few rumours floating around, and in most rumours there is always a little bit of truth," de Villiers said. "It's not just in the last while; it's for two or three years I've been searching for the right answers, to play a little bit less cricket in one way or another, to keep myself fresh and to keep enjoying the game. Every now and then in the past few years I've found myself on the pitch not enjoying myself as much as I should be, and that raises concerns within myself. I've been searching for answers and speaking to people and obviously that's leaked a bit."

That also means de Villiers is not sure whether he will want to lead South Africa's Test team permanently, even though he earlier said that being given the captaincy was the "fulfilment of a lifelong dream." The decision on who will take over as long-term successor to Hashim Amla, who stepped down after the Newlands Test, will be made during the winter break which is also when de Villiers will decide on his own future.

"I'm still very committed, to the job I'm not sure - obviously the two Test matches for now are all I'm focusing on and then there's a nice big break of six months before we play Test cricket again. Lots of things can happen before then so I don't want to commit myself too much to everything before that. But for now, I'm as committed as I can be and very, very hungry to make a success of the next two Test matches," de Villiers said.

Asked what he will consider in that period, de Villiers was unsure but mentioned the things that he would still like to achieve as an international cricketer, which stretch across various formats.

"I honestly don't know. But I've got some good advice around me, good people who have my best interests at heart, and we'll just try to make the right kind of call on which direction I want to go," he said. "My focus is on international cricket and I want to play for as long as possible. I've got dreams of winning World Cups and maintaining this No.1 status in Test cricket for as long as possible. Obviously I want to get my experience across to some of the youngsters. There are so many dreams that I'd like to follow. I'd just like to sit down, take some time away from the game and discuss all these things and make the right call."

For the next four months, de Villiers will find it difficult to get away from the game. After the Tests against England, South Africa play five ODIs and two T20s against the same opponents and three T20s against Australia before the World T20 in March and early April, which will be closely followed by the IPL.

De Villiers is contracted to Royal Challengers Bangalore until the end of 2017 on a deal worth Rs 9.5 crore (US$1.5 million). At today's exchange rate, that is 23.45 million rand, which is at least ten times more than his national contract which is believed to be between 2 and 3 million rand. The financial implications of that gulf against the backdrop of the congested international schedule is the biggest challenge facing the games' global organisers, according to de Villiers.

"I think it's a growing concern for the ICC and they've been talking about it for the last few years to find the right structure to keep all the guys fresh. Obviously international cricket is the main cricket you want to play, especially Test cricket. It's the main format and we all want to be part of that. There are huge traditions and culture in this format. I believe there are one or two areas where we can improve, and make sure that we keep the guys focus in the right place," de Villiers said.

"Obviously there are big tournaments going on around the world. Some you can't ignore because financially they make a huge difference in our lives, and obviously you've got to look after that side of it as well. International cricket is the main one you want to play, and one or two things will have to change in order for that to happen."

De Villiers said the ICC have conducted surveys to ascertain player concerns. "I have seen some changes," he said. "But there are definitely one or two that need some more attention."

His recommendation is for established players to have some leeway so that they can avoid being overworked and continue to enjoy the game. "One of those are the schedules of some of the older guys, to make sure they keep their focus on the right places. I don't know what the answers are, I just know there are quite a few guys feeling that we're playing a little too much cricket at times. We just need to get the focus right."