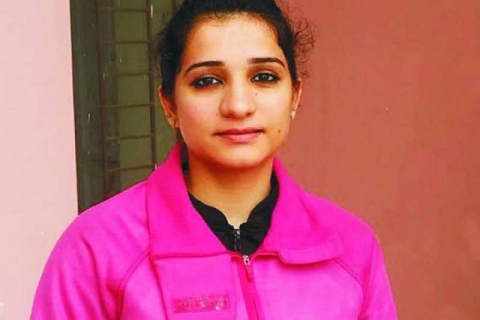 Pakistan’s second top badminton player Sidra Hameed termed Pakistan chances of winning medals in South Asian Games highly bright despite the absence of top player Palwasha Basheer, who opted to take rest after her marriage.
Sidra, who finished second in trials for the SAG said lack of international exposure, infighting between Badminton federations costs players dearly. “I had last represented county in 2011 during Fajr International Badminton Championship in Tehran, Iran. After that majority of players didn’t get opportunities to showcase their talent in international events, with the exception of few certain individuals, but that doesn’t help Pakistan cause a great deal.”
Sidra has also represented Pakistan in SAF Games held in Bangladesh in 2010 and Fajr International in 2011 in Tehran and is national doubles number two and singles number 3 according to current rankings. A total of 8 females were invited for trials for the selection of 6-member female squad.
Sidra said basic reason behind Pakistan failure to win international medals is non-availability of female coaches. “Sadly we don’t have even a single female coach in the country. Female players feel quite comfortable with a female in communicating and that could have helped us a great deal in India. I request Badminton Federation president Mian Iftikhar Hussain and secretary Majid Ali Chaudhry if not possible to arrange female coach for SAG then at least send a female as manager with the team. It would make us more comfortable and we would feel quite relaxed.”
When asked about PSB facilities being provided to them whether she and others are comfortable with that or they had complaints, Sidra said PSB had provided excellent facilities and accommodation, meal and other things are quite satisfactory. But she said the PSB must provide them with top quality shuttles for practice as the quality of the shuttles is not good. “Now I had heard DDG Facilities Agha Amjedullah has promised to provide Younix shuttles for practice in next few days. It would be a great help, as we need to train with same shuttles, which would be used during competitions.”
Sidra, 27, further said she was playing badminton for the last seven years and enjoying top positions in national events. “Being the senior most player it would be added responsibility on my shoulders to deliver goods for the country in South Asian Games.” When asked about realistic chances of winning medal in AG, Sidra replied quite frankly I am expecting at least silver medal in team event, mix doubles, doubles and at least bronze medal in singles. “But it depends on favourable draws, if we have likes of Bangladesh and Sri Lanka in our pool, our chances of playing semi-finals would be quite bright.”
She said after SAG the players did not have any competition in near future. “I would strongly recommend that Federation must ensure round the year training camps. It makes no sense of organising short term training camps. They have to arrange coaching clinics for females, send players and local female coaches abroad for courses, which would help country in having top class female coaches, who would produce top players in the days to come. I would request Pakistan Sports Board DG Dr Akhtar Nawaz Ganjera, IPC Minister Mian Riaz Hussain Pirzada and government to enhance PBF annual grant substantially, which would allow federation room and space to send players abroad, arrange national ranking events. Jobs must be provided to female players so more and more players could attract towards playing badminton as without offering attractive incentives nobody could even think about ordinary results.” She said she had suffered due to infighting in the federation as for the last 5-years no promotion was made in Wapda, where she is working in Grade-9, which by now, she should have been in Grade-18. “I request all stake holders to sit on table and work for the cause of promoting sports.”