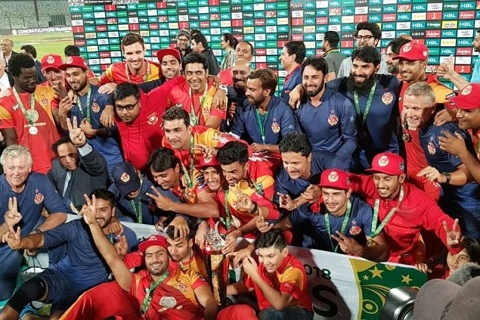 Luke Ronchi, Shahdab khan and Asif Ali powers Islamabad United over defending champions Peshawar Zalmi by 3 wickets at the National Cricket Stadium Karachi. It was memorable moments for all Pakistan but especially for the people of Karachi that Karachi hosted a match after the gap of 9 years.

Darren Sammy won the toss and decided to bat first on a batting paradise wicket but his decision did not get all the fruits as Islamabad’s spinners Ssamit Patel and Shadab Khan panicked and hunted Zalmi batsmen one by one so easily. Zalmi lost its firepower Kamran Akmal in the third over on just 1 run and lost three quick wickets on just 38 runs in 6 overs.

Jordan and Dawson scored 52 runs for the 4th wicket partnership and saved Peshawar from complete destruction but as Jordan was sent off, Zalmi once again lost its course to score a big score in the final. Wahab Riaz played a cameo of 28 runs at the end of innings on just 14 balls with 4 boundaries and a six as Zalmi scored 148 runs for the loss of 9 wickets in allotted 20 overs.

In reply, Luke Ronchi and Sahibzada Farhan provide a dream start to Islamabad United as both quick-fired 96 runs for the first wicket in 8.5 overs. Ronchi was removed by Jordan on 52 and there Zalmi came back to game once again as Islamabad United lost next 5 wickets in just 20 runs. The match was anybody’s game at that stage but Kamran Akmal lost a catch and there Zalmi lost the match as Asif then played a blinder of 26 runs in just 6 balls with the back to back sixes to Hassan Ali and Islamabad United crossed the line for the loss of 7 wickets in 16.5 overs.

Ronchi 52, Sahibzada Farhan 44 and Asif Ali 26 were the top scorers for Islamabad United. Hasan Ali, Wahab Riaz and Jordan bagged 2 wickets each while Umaid Asif got 1 wicket for Peshawar Zalmi. Kiwi player Lucke Ronchi of Islamabad United got the Man of the Match and Man of the Series awards.