Kamran Akmal’s record blitz outsmarted Karachi Kings in the second eliminator by 13 runs and takes Zalmi to the final of HBL-PSL3 against Islamabad United. 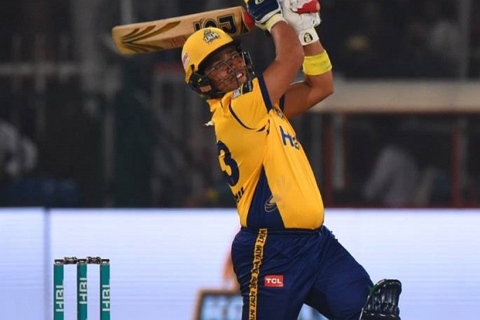 Second eliminator was played at Gaddafi Stadium Lahore but match was reduced to 16 overs because of heavy rainfall and wet out field that consumed time to get ready for the big match. Karchi Kings after winning the toss, decided to ball first. Kamran Akmal and Andre Fletcher were the openers for Zalmi and both the batsmen provided a dream start of 107 runs in the big match and set the platform for Peshawar lineup.

Kamran Akmal played a record breaking innings of 77 in just 27 devilries including the fastest half-century in the PSL history on just 17 balls. He smashed 8 maximums and 5 boundaries in his innings while Fletcher scored 34 and Darren Sammy played a cameo of 23 runs as Peshawar posted a reasonable total of 170 for the loss of 7 wickets in allotted 16 overs.

Ravi Bopara grabbed 3 wickets for Karachi Kings while Tymal Mills got 2 and Usman Khan picked up 1 wicket. Kings needed 171 runs in 16 overs with an asking rate of around 11 runs per over.

Karachi started their run chase with Mukhtar Ahmed and Joe Denly but they lost early wicket on just 13 runs in the second over and Babar Azam came to middle with Denly. Both the batsmen played confidently and freely as they build a partnership of 117 runs and shifted the momentum of the game to Karachi’s favor.

In the middle overs after completing his half century, Babar Azam gets little slow that once again put pressure on Kings and he got out while trying to play a slog shot on 63 runs but that was too late for Kings as they needed another 40 runs in Just 9 balls. Colin Ingram next came to join Dely as Kings managed to score 157 runs in 16 overs for the loss of 2 wickets and Peshawar Zalmi got the ticket of playing the final PSL-3 against Islamabad United at National Cricket Stadium Karachi.

Joe Denly 79 not out and Babar Azam 63 were the top runs scorers for Karachi Kings. Hasan Ali and Sameen Gul shared a wicket each between them for Peshwar Zalmi. Kamran Akmal was named Man of the Match for his entertaining innings. An interesting fact of the final is that the winners of PSL-1 to take winners of PSL-2 in the final of PSL-3 at National Cricket Stadium Karachi on Sunday 25th March 2018.