Anwar Ali leaked 23 runs in the last over but could not finish well as Peshawar eliminates Quetta from PSL-3 by just 1 run in front of pack house. 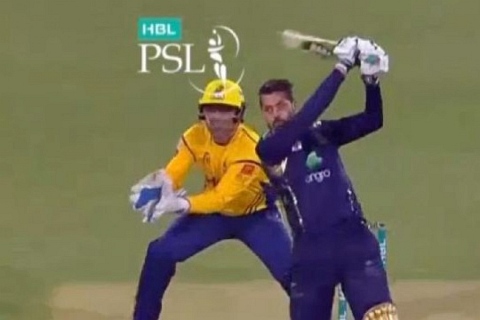 Peshawar finally breaks the 1 run jinx by defeating Gladiators in HBL PSL-3. In the first edition of PSL, Zalmi needed eight run to grab the victory but Quetta’s Aizaz Cheema conceded just six to defeat Peshawar by 1 run. Story was exactly the same last year as Peshawar was in peruse to chase 201 runs but managed to score 199 runs as Mohammad Nawaz restricted Zalmi to take just 5 runs in last over including removing 3 batsmen on last 3 balls of the over to cross the line by just 1 run.

Story was a different but teams were same as Anwar Ali was facing Peshawar’s Liam Dawson in the last over and Quetta required 25 runs to win the match. Anwar Ali started the over with a boundary followed by a six and a dot ball but the crowed witnessed the most heroic cameo of Anwar Ali as he almost clinched the victory from Zalmi. Gladiators required another 15 runs in last balls as Anwar Ali smashed 2 back to back sixes on the fourth and fifth delivery of the final over and needed just 3 more runs to win the match.

Anwar Ali played another big shot but it was a miss-hit, but the fielder dropped the catch recovered quickly to throw the ball back as Dawson kept his cool and dislodge the bails as Gladiators fall short by just 1 run and Peshawar Zalmi won the match.

After winning the toss, Quetta invited Zalmi to bat first as they posted 157 on the board in 20 overs. Liam Dawson 62, Tamim Iqbal 27 and Mohammad Hafeez 25 were the top runs scorers for Peshawar. Rahat Ali begged 4 wickets while Thisara Perera removed two Zalmi batsmen. Mohammad Nawaz, Mir Hamza, Hasan Khan and Mahmudullah got 1 wicket each for Gladiators.

Quetta required 158 runs in 20 overs with an asking rate of almost 8 an over but they lost their first wicket straight away when Asad Shafiq returned back without scoring a run on the very first ball of the innings. Gladiators lost their second wicket on 17 runs but then skipper Sarfraz promoted himself up in the order and both Mohammad Nawaz and Sarfraz contributed 63 runs for the third wicket partnership to strengthen the Quetta’s position but Sameen Gul removed Nawaz and Sarfraz in 2 balls to build another twist in the match.


Rilee Rossouw and Mahmudullah were the next batters and they added 36 runs for the 5th wicket but Umaid Asif once again shifted the momentum of the game towards Zalmi as he set Rossouw and Mahmudullah back to pavilion in one over and then Wahab Riaz in his final over picked up Thisara Perera and Hasan Khan to remove all the hopes of Quetta Gladiators.

In last over, Gladiators needed 25 runs but Anwar Ali played a blinder but still fall short by 1 run and Zalmi gets through to the second eliminator against Karachi Kings. Mohammad Nawaz and Sarfraz Ahmed scored 35 runs each and Anwar Ali remained not out on 28 runs. Hasan Ali, Sameen Gul, Wahab Riaz and Umaid Asif picked up 2 wickets apiece. Hasan Ali was named Man of the Match.