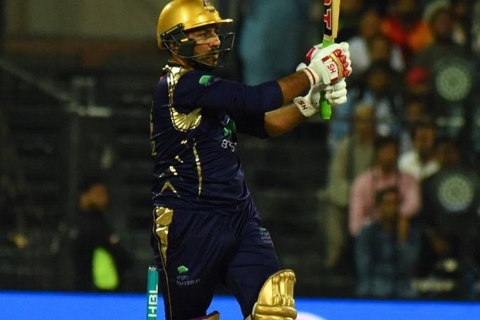 The 28th match between Quetta Gladiators and Islamabad United was played at Sharjah Cricket Stadium where Gladiators decided to bat first after winning the toss. Jason Roy and Shane Watson came to open for Gladiators but Watson fall prey on just 8 runs as Umar Amin came to replace him. Gladiators only managed to score 41 runs in 7 overs and their Key batsmen Watson, Roy and Pietersen were sent back to pavilion.

At that stage Umar Amin build a partnership of 64 runs with skipper Sarfraz Ahmed for the 4th wicket but as Umar departed none of the batsmen moved scorecard easily but Hasan Khan played a cameo of 15 runs in just 9 balls to take Quetta to reasonable total of 147/7 in 20 overs.

Sarfraz 48 and Umar 28 were the top scorers for Gladiators. Faheem Ashraf grabbed 3 while Amad butt picked up 2 and Samit Patel, Hussain Talat got 1 wicket each for Islamabad United.

From Islamabad, inform duo of JP Duminy and Luke Ronchi came to bat but Rahat Ali removed Ronchi on just 10 runs. Alex Hales contributed 45 runs with Duminy for the second wicket but Hales was cleaned up by Mir Hamza. Shahdab Khan scored 18 runs and he was bowled by Shane Watson then came Hussain Tallat who added 44 runs with Duminy for the 4th wicket but Duminy too was removed by Rahat Ali on 54 runs.

Asif Ali was the next batsmen and he was in a hurry to complete the runs chase as he played an innings of 18 runs in just 7 balls and takes Islamabad home to win the match by 6 wickets in 18.2 overs.

JP Duminy 54, Hussain Tallat 28 not out and Asif Ali unbeaten on 18 were the top runs scorers for United. Rahat Ali got 2 while Mir Hamza and Watson grabbed 1 wicket each for Quetta. For playing an incredible innings of 54 runs, JP Duminy was declared man of the match.

Lahore Qalandars to face Peshawar Zalmi in the first match today at 4:30pm (PST) while Karachi to play against Quetta Gladiators in the last match before the playoffs at 9:00pm (PST).