A late show started by Lahore Qalandars as they bagged third in a row victory after beating Quetta Gladiators by 17 runs at Sharjah Cricket Stadium. 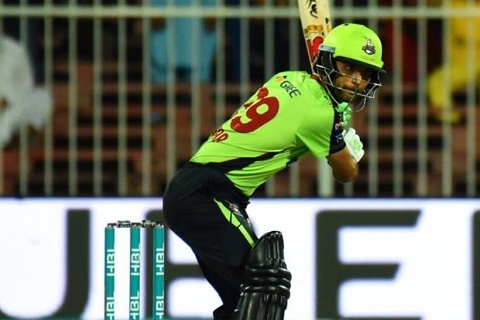 Lahore Qalandars certainly getting the momentum in their was as they came out as entirely a different unit after securing third consecutive victory in a row by defeating Quetta Gladiators but now it’s too late for them to reach next level. Gladiators after winning the toss put Lahore to bat first.

Fakhar Zaman and Anton Devcich came to open for Qalandars and provided a good start of 43 runs. Anwar Ali sent Devcich back to pavilion on 18 runs. Qalandars then lost some momentum as two of their key batsmen Agha Salman and skipper McCullum got back to the dugout too early but on the other hand, Fakhar Zaman continue to score runs from other end.

Wicket-keeper batsman Gulraiz Sadaf then came to bat with Fakhar as both the batsmen contributed 68 runs for the 4th wicket partnership. Fakhar was caught on 94 runs when he was trying to clear the boundary line. He played the biggest individual innings of PSL-3 so far. Sharjeel Khan and Kamran Akmal scored a century each in first and second editions of PSL respectively.

Sunil Narine then came to bat and Qalandars ended their innings on the highest note as they scored highest team total 186/4 in 20 overs. Fakhar 94 and Gulraiz 42 were leading runs scorers for Qalandars. Anwar Ali, Rahat Ali, Mir Hamza and Hasan Khan bagged 1 wicket each for Gladiators.

Quetta got a flying start as entrant Jason Roy and Shane Watson put 52 runs opening stand in just 5.2 overs but then they lost the momentum and half of their side was sent back to dugout on 92 runs. Rilee Rossouw resisted in the middle and played a cameo of 42 off 22 with 5 maximums but Mitchell McClenaghan bowled him. After that Sarfraza Ahmed and Mohmmmad Nawaz tried hard but Lahore bowlers could not allow them to play freely and managed to score only 169/6 in 20 overs as Lahore Qalandars take the match by 17 runs.

Rilee Rossouw 42 and Jason Roy 36 were top run scorers for Quetta. Sunil Narine and Yasir Shah picked up 2 wickets each while Mitchell McClenaghan and Shaheen Afridi got 1 wicket apiece for Qalandars. Fakhar Zaman for his glittering innings was given Man of the match award.