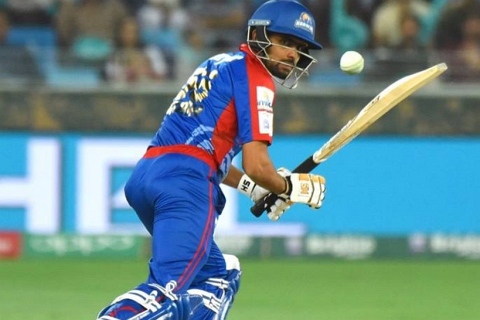 Lahore Qalandars was involved in the both super over encounters but this time, Qalandars emerged victorious against the Kings of Karachi. Lahore Qalandars after winning the toss invited Kings to bat first. Start of Karachi was not as good as it used to be as they lost early wicket on 19 runs then Babar Azam along with opener Lendl Simmons contributed 71 runs partnership and both the batsmen scored half-centuries for Kings.

As both the batsmen departed, none of the remaining batsmen used the momentum to finish well for Kings and they scored 163/5 in 20 overs. Babar Azam was top scorer with 61 while Simmons added 55. Sohail Khan took 3 wickets while Yasir Shah and Shaheen Afridi picked up 1 wicket each for Qalandars.

Fakhar Zaman and Anton Devcich came out to open for Qalandars and both added 26 runs and then Fakhar and Agha Salman contributed 63 runs for the second wicket. After completing his maiden half-century in PSL, Salman was sent packing by Usman Khan and in the same over Khan also removed Brendon McCullum on 15 runs. Kings got back to back wickets and match was tilting towards them as Qalandars needed 16 runs in last over to win the match.

Sohail Akhtar was facing Usman Khan in the last over as he slapped a four and a six on the second and third ball of the over to alive the match once again. Mohammad Rizwan runs out Mitchell McClenaghan and Gulraiz Sadaf came to bat as he took single and Sohail was facing Usman on last ball with 3 to win and 2 for another super over. Sohail played a big shot but that was caught by the fielder on the boundary but more drama continued as Usman was overstepped and ball was declared NO ball and given a free hit. Again Qalandars needed 2 runs on last ball but they managed to get only one and match was moved to the super over.

Playing first in the super over, Mohammad Rizwan runs Fakhar Zaman out on very first ball and after that Lahore Qalandars posted 11 runs and Kings required 12 to win the match. Narine came to ball the super over and takes the match into his grip when Mitchell McClenaghan took a blinder and they still needed 11 runs to win. On the 5th delivery, Simmons and Shahid Afridi posted a 6 on the last ball but that was too late as Qalandars registered their second win the PSL-3.

Agha Salman 50 and Fakhar Zaman 28 were top scorers for Qalandars. Mohammad Irfan (jr) and Usman khan grabbed 2 wickets each while Mohammad Amir and Imad Wasim picked 1 apiece. Agha Salamn was given the Man of the Match award for his match winning innings.