Shane Watson and Kevin Pietersen setup a platform for Quetta Gladiators to defeat Karachi Kings by a record 67 runs. 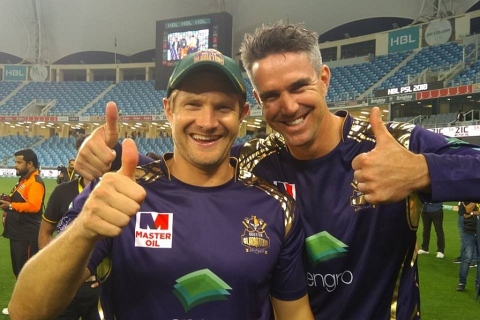 Karachi Kings after winning the toss invited Gladiators to bat first where Asad Shafiq and Shane Watson came to open from Quetta. Both the openers take onto the bowlers and contributed 60 runs for the first wicket Shafiq was sent back by Shahid Afridi on 16 runs and Pietersen came to join Watson as the duo’s firepower snatched the match from Karachi in the first half. Watson- Pietersen added 86 runs for the second wicket as they provided a solid platform to Gladiators and they ends up on 180 for 4 in allotted 20 overs.

Shane Watson remains unbeaten on 90 in just 58 balls with 7 maximums and 5 boundaries while Pietersen scored 52 in 34 for Gladiators. Mohammad Amir, Usman Khan, Mohammad Irfan (jr) and Shahid Afridi picked up 1 wicket each for Karachi Kings.

Start of Kings was not as good as expected as they lost both their openers Joe Denly and Shahid Afridi on 2 runs in 2 overs and none of them resisted too long as half of their side went back to dugout on just 55 runs in 11th over. Imad Wasim and Mohammad Rizwan setup a small partnership of 34 runs but Rahat Ali set packing Imad on 35 and at the end of 20 overs, Kings only managed to score 113/8 and lost the match by a massive 67 runs. This was the biggest win margin (by runs) in PSL and previous record was 63 runs by Lahore Qalandars against Quetta Gladiators in 2016.