Noting going in their way as Lahore Qalandars extended their losing streak to six and almost out of PSL-3. 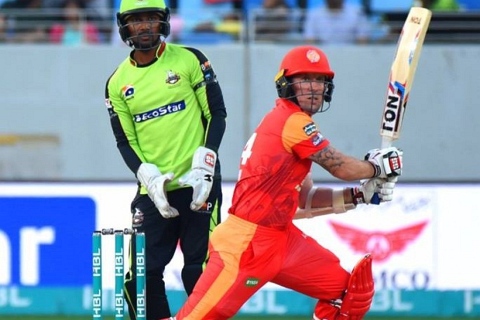 It was a must win game for Lahore Qalandars and after winning the toss Islamabad united opted to filed first. Qalandars were playing with a new opening pair as they changed 5 pairs in 6 matches. Fakhar Zaman and Anton Devcich came to bat for Qalandars and provided a dream start of 56 runs in 6.4 overs. As Fakhar departed, Agha Salman joined Devcich in the middle and both contributed 45 runs for second wicket.

Devcich was playing flawlessly and was unstoppable but he could not get the response from other end as Denesh Ramdin scored only 9 runs in 20 balls that put extra pressure on Devcich as he started playing wild shots and got out on 62 runs. Devcich hit 3 sixes and 4 boundaries in his innings. Lahore were 101 after 11 overs and they came up with 123 runs at the end of 17 overs.

Skipper Brendon McCullum played brilliantly in the last part of innings as he hit 3 sixes and couple of fours in his innings of 33 in just 12 balls as Lahore Qalandars posted 163/8, a reasonable score on the board.

Anton Devcich 62, Fakhar Zaman 34 and and McCullum 33 were top runs scorers for Lahore. Faheem Ashraf bagged 3 wickets while Duminy, Mohammad Sami and Shadab khan got 1 wicket each for Lahore.

In reply, JP Duminy and Luke Ronchi provided a solid start of 47 runs in 4.3 overs but Ronchi continue playing big shorts after Duminy was sent back by Narine on 21. Ronchi came hard against all Qalandar bowlers as he quick fires 77 runs in just 41 balls with the help of 6 massive sixes and 5 fours. Shadab Khan also helped Ronchi from the other end as he played innings of 32 in 24 balls and United chased down the score in 17.4 overs for the loss of 4 wickets to win the match by 6 wickets.