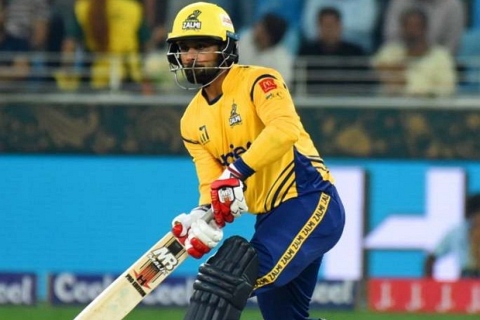 Peshawar Zalmi was playing without their regular captain Darren Sammy in the opening match third stage where Mohammad Hafeez was the interim skipper and after winning the toss he decided to field first.


Veteran Kumar Sangakkara and Ahmed Shahzad came out to bat and provided an excellent start of 51 runs in 7.3 overs but Sanga departed on 28 runs. Out-of-form and a bit nervous Sohaib Maqsood came to bat on number 3 with Ahmed Shahzad and both the batsmen contributed 56 runs partnership for the second wicket and Shahzad was set back to pavilion. Skipper Shoaib Malik could not stay long and toppled by Umaid on 13 runs and big man Pollard came to bat.


Sohaib Maqsood meanwhile gained the much needed form and take all the bowlers aggressively as he played a glittering knock of 85 runs on just 42 balls with the help of 7 maximums and 4 boundaries. He played brilliant strokes all over the ground and none of the Peshawar bowlers contained him from scoring the runs and Sultans posted the highest total 183/3of PSL3 so far on the board.


Sohaib Maqsood unbeaten 85, Ahmed Shehzad 37 and Kumar Sangakkara 28 were main runs scorers for Sultans while Umaid Asif and Liam Dawson were the only bowlers picked up 1 wicket each for Zalmi.


In reply, start of Peshawar was not good as they lost 3 wickets on the total of 53 in the 9th over. Riki Wessels 22 and Liam Dawson 32 tried to build the innings and contributed 49 each runs for the 4th and 5th wicket respectively with the skipper Mohammad Hafeez but after they were sent back to dugout none of the Zalmi batsman stood in the way of Multan bowlers as Zalmi managed to score 164 runs for the loss of 9 wickets in allotted 20 overs and Sultans won the second match against Peshawar by 19 runs.


Sohaib Maqsood was declared man of the match for his flawless batting performance. Multan Sultans still tops the points table with 9 points followed by Karachi Kings with 7 points. Next match of third stage to be played between Multan Sultans and Quetta Gladiators tonight at 9:00 pm (PST).