With 7 points each, Multan Sultan and Karachi Kings stand on top of the table halfway through series while Lahore Qalandars are still hoping for a miracle to get first victory in PSL-3. 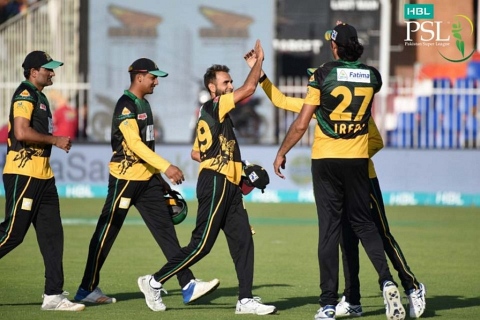 Third edition of Pakistan Super League started with a grand opening ceremony on 22nd February where legendary Sufi singer Abida Parveen and American Pop musician Jason Derulo along with local heartthrobs Ali Zafar and Shahzad Roy performed in front packed stadium. Tournament started with the big announcement of chairman PCB that Lahore will host 2 play offs while Final of PSL-3 is to be played in Karachi.


Multan Sultans were the entrants in the third edition. All the teams showed balance on papers and team captains Showed winning spirit in 3rd edition of the tournament. All the teams inducted big names in their squads but prime focus were new addition Multan Sultans during and after the drafts.


As all the teams played half of their matches, entrants Multan Sultans are leading the points table after surprisingly winning 3 matches followed by Karachi Kings with 3 wins, whereas defending champions Peshawar Zalami with 3 wins stand on third spot. Islamabad United, after winning 3 matches, remain on 4th position and runners up of PSL-2 Quetta Gladiators with just 2 wins in their pockets ended on 5th spot. Not surprisingly comatose Lahore Qalandars could not win any of the matches and stand on rock-bottom of the points table at 6th place.


First match was played between PSL debutant Multan Sultans and reigning champions Peshawar Zalmi on 22nd February at Dubai International cricket stadium. Although, both the teams were well balanced and well equipped with all their arsenals but limited overs King Shahid Afridi was not the part of Peshawar Zalmi as he switched his place to Karachi Kings. Peshawar came to season 3 with a good track record where they were defending champions and also played the playoff in the first edition of PSL.


Multan’s skipper Shoaib Malik, after winning the toss, was elected to field because of unknown behavior of the pitch and Peshawar managed to post 151 runs on the board which Sultan’s easily chased down for the loss of 3 wickets only and announced their arrival in the PSL with a big bang.


Next match was played between PSL-2 finalist Quetta Gladiators and minnows Karachi Kings and surprisingly the Kings shocked Gladiators in a one-sided encounter by 19 runs. Shahid Afridi was main factor as he boosted the confidence of Kings to a new height and rung the alarm for the opponents.


The third encounter was played between entrants Multan Sultans and Lahore, that remained on rock bottom side in PSL-1 and 2. Lahore Qalandars started their campaign as they never learned from their mistakes and Sultans quashed Qalandars in this encounter by 43 runs.


Zalmi then faced Islamabad United who were champions in the first edition but ended on 4th spot in PSL-2. In this match, Zalmi thrashed United by 34 and once again Quetta Gladiators defeated Qalandars by 9 wickets. In the 6th match of tournament, Islamabad defeated Sultans and put a stop to their unbeaten run. United not only restricted Multan on 113 runs but also achieved the target for the loss of 5 wickets and announced their revival with a boom.


In the second stage of PSL-3 played at Sharjah cricket stadium crowd witnessed low scoring thrillers. Gladiators scored 141 runs and Zalmi chased down the target in 19.4 overs where skipper Darren Sammy played the last three winning shots at that stage where he was injured and unable to move freely.


11th match was abandoned due to rain in Sharjah cricket stadium and crowd witnessed an absolute thriller where batting first, Islamabad United posted 121 runs on board and with plenty of dram the match ended with Lahore- all out on 121. This match entered in the list with first super over in the history of PSL.  In the super over, Lahore posted 16-1 and Islamabad United chased the target on the last ball of over to win the match. The victory provided Untied a new spirit and in the last match of second stage, they overpowered Afridi-less Karachi Kings in an exciting match by 8 wickets and put a full stop to winning streak of Karachi Kings.


The third stage of PSL-3 is to start tonight where Peshawar Zalmi is to play against Multan Sultans at 9:00 pm (PST). Though Multan lost against United but their squad is intact while Tamim Iqbal may leave for the national duty while skipper Darren Sammy is not fully fit to play.