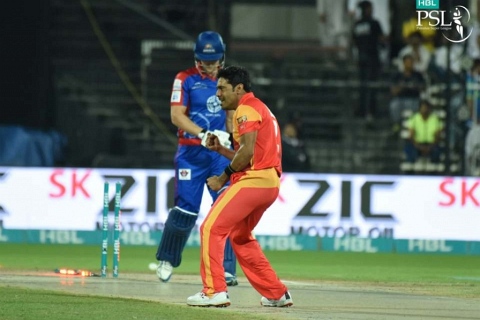 United’s skipper Misbah ul Haq won the toss and put Kings to bat first in the last match of second stage. Joe Denly and Khurram Manzoor came in the middle but Mohammad Sami sent back Denly in the second over on the team total of only 6 runs. Young Babar Azam came to replace Denly and both the Pakistani players started the partnership carefully as they only scored 32 runs in power-play overs and completed the team 50 runs in 10.1 overs.


After 10 overs of play, they completely change the game plan and came hard against the Islamabad bowlers and completed the 100 mark in just 14.4 overs. Meanwhile both batsmen completed their half-centuries and contributed 101 runs for the second wicket. Khurram Manzoor departed, United bowlers came aggressively against Kings and sent half of their side back to dugout on just 126 runs in the 18th over.


Later down the innings, wicket-keeper batsman Mohammad Rizwan played a cameo of 21 in just 9 balls with 2 boundaries and a six as he not only saved Kings from complete destruction but also helped Karachi to post 153 on the board at the end of 20 overs for the loss of 6 wickets.


Babar Azam 55, Khurram Mnazoor 51 and Mohammad Rizwan 21 not out were the key runs scorers from Kings. Faheem Ashraf remains pick of the bowlers as he got 3 wickets while Mohammad Sami and Hussain Talat picked up 1 wicket each from United.


Islamabad United got a dream start as both the oversees players Luke Ronchi and JP Duminy added 104 runs for the first wicket partnership which completely put Kings on the back foot. Ronchi played a blinder of 71 runs with the help of 10 fours and 3 gigantic sixes. His counterpart Duminy scored 43 of 44 balls and Asif Ali played a short cameo of 26 runs in just 16 balls as United thrashed Kings by 8 wickets in 17.2 overs and put a hold on their winning line.


Mohammad Amir and Mohammad Irfan (jr) got one wicket apiece for Karachi Kings.


Luke Ronchi for was given man of the match award for his blistering innings of 71 runs. After playing 5 matches each, entrants Multan Sultans were leading the points table followed by Karachi Kings while winless Lahore Qalandars ended on the rock bottom.


Third phase of PSL-3 will start tomorrow where Multan Sultans to face Peshawar Zalmi in the only match to be played at Dubai international cricket stadium.