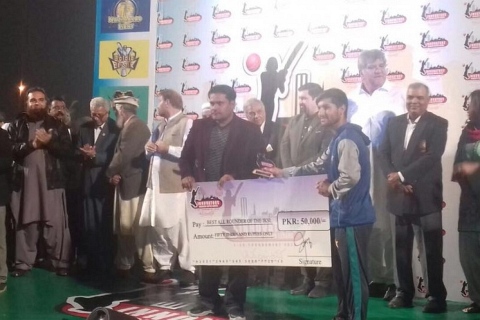 Malir Dragons after winning the toss elected to bat first in the final of Karachi Super League’s inaugural edition. Dragons scored 34 runs in first 5 overs but could not continue the momentum as they managed to score only 124 runs in 20 overs for the loss of four wickets. Opener Arslan Farzad scored 42 runs in 43 balls while Arslan Bashir contributed 36. Salman Khan played a fast cameo of 27 runs in just 16 balls to end of the innings on 124 runs. Sadiq Ali, Tauqeer Malik, Aarish Ali Khan and M. Zahid all picked up 1 wicket each from Kurangi Fighters.


In reply, Raja Liaquat guided his team to win the inaugural edition of KSL by 7 wickets as Fighters chased the target in 19.3 overs for the loss of 3 wickets. Dragons started the bowling really well and picked up both the Kurangi openers on the total of just 11 runs but them Raja Liaquat played a glittering innings of unbeaten 60 runs in 50 balls. Taimoor Ali first helped Liaquat in the runs chase and later Waeem Ahmed came to rescue his team and steers Fighters to victory with Liaquat. Taimoor played innings of 32 runs while Waseem remained unbeaten on 22 runs. Touheed Khan, Jaam Muhammad and Rao Sajid got 1 wicket apiece from Dragons.

Former PCB chief selector Salahuddin Ahmed was the chief guest on the occasion and he distributed prizes alongside other distinguished guests, including KSL chairman Saqib Iqbal Shad.