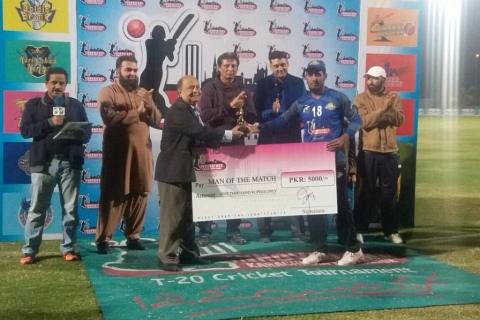 In the first quarterfinal, Nazimabad lions thrashes Orangi Hunter in a low scoring thriller as the match ended on super over where Nazimabad humbles Hunters by 5 runs to get place into the semifinals.


Orangi Hunters after winning the toss choose to bat first and managed to score 136/10 runs in 20 overs. M. Faisal was top scorer with 29 runs and Rehan Tanoli, Fawad Khan scored 24 runs each. Usama Bashrat picked up 3 while Junaid Naeem, Akbar Babar got 2 each and Shah Hussain grabbed 1 wicket from Nazimabad Lions.


In reply, Hunters held Nazimabad on 136 runs in 20 overs as the match entered in the super over. Osama Butt contributed 38 runs while Akbar Babar added 29 from Nazimabad. Zia ul Haq grabbed 3 wickets while Zafar Ali got 2 and Fawad Khan picked up 1 from Hunters.


While batting first Lions scored 18 runs in the 6 balls and give a target of 19 runs to Hunters in one over but Orangi batsmen were not fully able to take the challenge as they managed to score only 13 runs and lost the match by 5 runs. Shah Hussain was given man of the match award.


The second quarterfinal was played between Korangi Fighters and Liyari Riders at naya Nazimabad cricket stadium, Karachi. Fighters won the toss and choose to bat first as their innings was wrapped up by Liyari bowlers on just 128 runs in 20 overs. Crowed enjoyed another low scoring thrilling as Liyari bowlers did not allow Fighters to chase down the score and held them 8 runs short of the target on 120 runs in 20 overs where Korangi lost its 9 wickets during the chase and Riders wont the match by 8 runs. 46 not out runs of Ali Jasim went in vain as Fighters could not capitalize against Riders bowling attack. Muhammad Zahid and Aarish Ali Khan grabbed 2 wickets each and Aarish form Liyari Riders was given man of the match award.


Third quarterfinal of the tournament will be played between Kemari Warriors at 4pm while the last quarterfinal will be staged at 8pm between Gulshan Tigers and Surjani Eagles tonight.