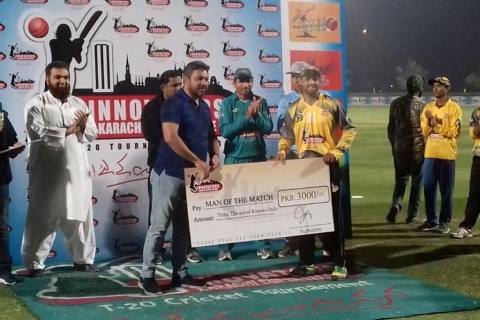 Karimabad after winning the toss elected to bat first. Korangi kept well throughout the innings but Mehmood Ali from Kings bagged 22 runs in the 19th over of the innings including 2 huge sixes and a boundary to complete his half century and put a competitive total of 135 runs in allotted 20 overs for the loss of 8 wickets. Mahmood Ali scored 70 runs in 51 balls while Ahmer bin Nasir scored 22 runs but none other batsman stayed on the wicket and helped Mahmood Ali as 7 Karimabad batsmen did not enter into the double figures. Sadiq Ali grabbed 4 wickets for 23 runs in 4 overs while Aarish Ali Khan, M. Waqas and M. Zahid picked up 1 wicket each from Fighters.

Korangi openers played watchfully as they managed to score only 36 runs in power-play overs in comparison to Kings who only scored 31 runs for the loss of 3 wickets. After the power play, Korangi opener Fayyaz Hussain started playing openly and with his brilliance, Fighters chased the target in 18.4 overs for the loss of 4 wickets. Fayyaz Hussain played the innings of 82 runs in 52 balls while Taimoor Ali scored 15 runs. Ghazi Nasir, M. Bisalat and Mehmood Ali picked up 1 wicket each from Kings.